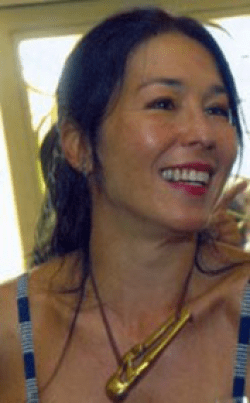 Nicole Collet, daughter of French and Chinese immigrants, is a Brazilian-born writer and translator fluent in English, Portuguese, Spanish and French, with degrees in journalism and cultural management. She has edited and translated works from authors as diverse as Ken Follet, Nora Roberts and Machiavelli. Collet’s writing explores why people fall in love and what it takes for them to stay in love. Her plots invite readers to think outside the box, merging story with psychology, neuroscience, philosophy, music, and literature.

NP:  How would you describe your background? How has your experiences affected you as a thinker and writer as well as your philosophy of life?

Collet: I grew up in Brazil in a time when Asians were still stereotyped and mocked. Having immigrant parents and Asian features always made me feel different from the other kids in a moment when I desperately wanted to fit in. Only as a young adult was I able to fully integrate within me those three very different cultures. Brazilians are very laid-back, the French are more stern, and the Chinese can be even more reserved–at least, my Chinese mother is. In college things suddenly changed and I was no longer “different”: now people said I was “exotic.” I guess I have always been very cerebral so to speak, reading a lot from cheap Harlequin novels (guilty pleasure) to classics and quality literature. I’m enraptured by beautiful prose and insightful ideas. Psychology, philosophy and neuroscience fascinate me because they deconstruct the human nature: I’m very interested in understanding how people function, the root of their emotions and why they do what they do.

NP:  Sex is not an addiction in that “at least in the sense that it does not neurologically behave like other well-documented addictions,” according to recent studies in neuroscience at UCLA. It’s certainly a pleasure to write about. It’s seems natural part of the human libido.  With so much being written about sex do you see some positive outcomes as humans strive to understand and explore the nature of intimacy with each other?

You have hardcore on the Internet and soft-core in pop culture, but in the end of day it’s all pornography. You have women and increasing cases where men are reduced to body parts in an advertisement. Female singers are forced to behave like strippers onstage to stand out, and young teens believe blow jobs and handshakes belong to the same category.

Sex is sacred, though. Not sacred in a moralist sense but sacred as a very intimate connection with another human being. This shouldn’t be taken for granted. When you take that for granted you end up losing a precious part of your own humanity.

NP:  What challenges do you see for yourself in the future as a writer?  What do you think is the future of writing as a result of technology and that it appears that the “seeing” public is becoming more visually oriented and less time is spent on reading?

Collet: My first challenge would be to make a living writing my beloved stories and not having to spend so much time and energy promoting my work. I’m a writer not a publicist. Being simultaneously a professional with a daytime job, a writer AND a publicist is daunting. My second challenge would be to become as skilled in English as I am in Portuguese when it comes to writing my stories. As for our culture being more image-oriented than print-oriented, it makes me a bit sad. In the genre that I write, which is romance, you have many readers. Romance, actually, is the most popular literary genre. However, for what I see, readers use romance novels as a mean for escapism. There’s nothing wrong with that. But books should be sought for more than mere escapism and emotional roller coasters.