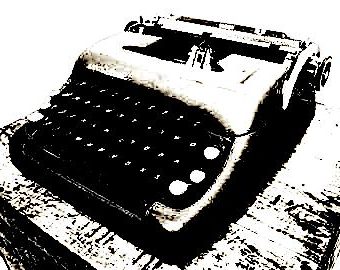 I arrived at the rented beach house in the early evening as the sun began to slowly disappear beyond the trees on the other side of the earth and the Atlantic’s rolling waves were now accentuated with rising white caps and splashing the shore.

Upon unpacking my clothes, groceries and other stuff I briefly sat down in front the fireplace and pondered my life as a technologically oriented author who decided to forsake the future for a few days with a manual Smith Corona typewriter that I quietly brought with me. Intimacy arrives in different forms.

The patio door was open to a fragrant breeze from the ocean sweeping across the sands causing the typing paper to flutter while I was in the midst of pondering my words. The prefabricated though stylish dwelling began to creak and moan, then all grew quiet save a few seagulls skimming the surface of the waves near the shoreline calling out for fish.

And, I thought how fortunate I was typing on this effective manual tool near the beach with the idea that each word was nowhere else recorded or digitally stored. It was an intimacy between the author and his words that meant little to others except himself or at least I thought at the moment. Still, I now could write anything to my heart’s content and no one, except myself would be the wiser. How I envied those authors of ages ago who possessed the privilege of privacy with a manual typewriter though admittedly rewrites and making copies are indeed a chore from the viewpoint of the technological future.

So I continued to write my story with my back now turned to the patio door window as it grew dark but felt someone looking over my shoulder only to discover it was a seagull perched on the patio railing with an eye towards my work and a full moon was above the waters. So I adjusted my chair and small desk and I heard the seagull’s voice, as she or he may have felt slighted by my desire for private moments with my words.

By the time I finished I heard additional noise outside when there were now two sea gulls looking in on me and I began to question whether they were corporate drones until I went to the refrigerator and retrieved a small fish then threw it on the patio deck and watched the birds dive in to and divide up the gift though I never saw them eat it. I could have sworn I heard a buzzing sound but then changed my mind when it looked as if a dropping began to emerge from one the birds.

Bemused I shrugged and returned to the business of typing my short  story oblivious to the world around me and satisfied I’d done my best until I lay down for short spell only to awaken to the sound of the two seagulls waiting to see what I would do next with what looked like a smirk on their beaks or perhaps, I surmised, they accidentally flew into the door.

I looked over at what I was writing and on the page I’d been typing on contained the following seven words at the top, with their dramatic sounding irony; “Little did the seagulls and he know.”