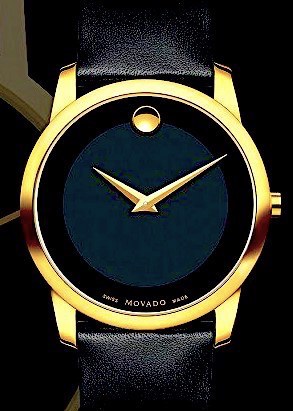 After a day or two I reflected on the words written by the author of Ecclesiastes  –  all is “vanity” or philosophically, futile…perhaps I had rationalized the thought – “by knowing the time, I somehow knew time itself,” and I somehow had control over it or I could manipulate time itself. Even from an artistic standpoint the idea was nonsense unless one is a surrealist.

In my practical quest to know more about the nature of my now “naked wrist of time” I knew the new leather band I had purchased the previous week wasn’t secure. And the day it turned up missing I had considered returning it to replace the pins that kept the leather band in place. It obviously came lose and I didn’t notice the missing wristwatch until two or three hours later after I took off my coat. Where were my thoughts “at the time” of its missing? Checking at the local stores, gas stations and so forth, yielded no clues.

Days went by. I occasionally looked at my naked wrist. I reasoned that whomever found it was enjoying it. I mean I had a twenty-year relationship with it. That was longer than most marriages. Why not allow someone else the joy of looking at a numberless face with no second-hand. I mean what meaning did it have except that which I allowed my emotions to give it?

As I observed, it really is just a piece of art. I now began using my android phone to tell me the time if I needed to know. And as I looked around time was staring me in the face from every direction  – my car, android phone, television, laptop computer – the list is endless as if knowing the time I could somehow better manage it like the wrinkles in my aging skin.

Then after ten days a most bizarre thing happened. By now I had grown accustomed to my naked wrist. I was in the midst of achieving a new timeless freedom. The less I had to wear the more freedom I possessed.  And then it occurred.  Yesterday afternoon I was approached by a woman. She was wearing a wide grin. I smiled in return and was about to get into my car and head up to Ann Arbor when she said, “Wait, I think this is yours,” she said handing me my watch.

“What? Are you serious? Where did you find it?”

“In a drawer in my refrigerator, underneath some broccoli and a package of salmon I was just finding room for in the refrigerator.”

“A week or so ago you helped me with my groceries. Your watch must have fallen off into the bag. I just shoved everything in the drawer until today as I was checking what to cook for dinner. I found this watch frozen in time so to speak.”

“It was a matter of figuring who, where and when. So I tracked you down.”

She laughed and asked, “Do you like salmon and broccoli?”

“Well…I am a pescatarian.” I said, pondering what my new relationship with my wristwatch, time and people would evolve. Perhaps there is no significance – serendipity or otherwise except in the human mind.

“You look some what…bewildered.” she said.

“I’m evolving.” I replied as I noticed my wrist watch was still keeping time.