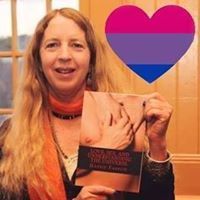 Harrie Farrow is a board member of BiNet USA and author of the bisexual themed novel, “Love, Sex, and Understanding the Universe.” She’s also a journalist, consultant, and speaker on bisexual issues and the bisexual community. Farrow grew up in the Virgin Islands, graduated from San Francisco State with a BA in Psychology and a minor in Human Sexual Studies, and currently resides in the Ozarks.

NP:  Human sexuality is complex. What are your thoughts about the meaning of bisexual and bisexuality?

Farrow: Bisexual is a term that simply means attracted to more than one gender. Yes, human sexuality is complex, thus there is no one-way and no right way or wrong way to be bisexual.

NP:  Do you think we are approaching a time when our cultures will become more tolerant of people who are open about being bisexual and their bisexuality in its various expressions (e.g. relationships, politics, fashion, literature)?

Farrow:  I might have answered this question differently prior to the 2016 U.S National Election. Before that it did seem that things were on the way – albeit all too slowly — for better acceptance for bisexuals. Now there are so many other issues that so many of us are having to face that I fear bisexual issues will once again be pushed to a back burner. However, I for one am making a concerted effort to not forgo bisexual advocacy even as I step up to protest the republican administration, and protect democracy.

NP:  How would you describe the positive effects of bisexuality on human culture and society and what does the future of our understanding hold in your opinion?

Farrow: Perhaps the main thing that is beautiful about human culture is its vast array of manifestations and presentations. Bisexuality, like other sexual orientations, adds to the variety. From my perspective as a bisexual person, I see bisexuality as a very beautiful bountiful aspect of the human condition, in all its multifaceted forms.

I think the future holds an understanding that humans are all different — a reality that is both good and as it should be. People will matter-of-factly get that some humans are attracted to multiple genders. This will be seen as just a very cool fact along with so many other cool facts of existence.

My Novel: “Love, Sex, and Understanding the Universe”

Connect with me on LinkedIn