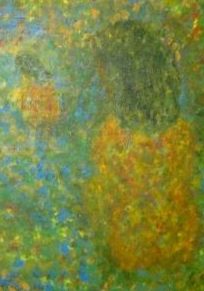 The Past is Present by LJ Frank, Artist

Recently, I was asked about my philosophical approach to dying and death by a person who works in an environment that serves people whose families are unable to care for their loved ones or those who were deserted by society and exist without family or friends.

My anecdotal thoughts: practically speaking, dying and death are inevitable. Death is the cessation of all biological functions of the human body. The social aspects of death can be viewed in funeral homes and cemeteries where people pay respect while the dead person’s blood at the funeral home is drained into the sewer system. I only mention that as ancient religious rituals maintained the essence of the human soul was derived from our blood and water and therefore it might be wise to retain the blood and water in the body after death. The etymology of the English word soul is Proto-Germanic – the roots of the word mean “from the water.” In the ancient Middle East, etymological roots of soul are traced back to “blood.”

Times change as do traditions, particularly when money is involved. Soul came to mean a mist like spirit rising from the body after death and beliefs evolved with elaborate rituals depending on one’s station in life.

As soon as a person is born they begin to die. It’s a scientific law. I know much less about what happens after death. Those that think they know are working with supposition, perception, belief, faith, hope and other insights. Some ideas can be quite deep and ambiguous. Personally, I like ambiguous. The claims of life after death would seem to require substantial evidence beyond belief. Experience suggests it’s a personal event to witness. Unless one experiences it, the “it” becomes second-hand and hearsay. The ambiguity may exist in being witness to such an event. I have no physical evidence for my perceived spiritual experiences though sometimes my face may betray an enigmatic expression. Life and death remain somewhat of a mystery to me, even within and beyond the scope of inspired literature.

To appreciate the impact of my dying and death is on some level to question the meaning of my life. The meaning is also dependent on the condition of my body and mind. I experience the body and its organs I was born with, though I may change and modify the organs for whatever reason. Regardless, I remain human through my memory, internal wiring, experiences, filters, studies, interactions with others, environment and all that affects who and what I am. My life gains meaning in relation to others. Hamlet observed to his friends Rosencrantz and Guildenstern that – nothing is either good or bad but thinking makes it so. In large measure his observation appears accurate until you try to reconcile unfairness and injustice, especially applied to dying and death.

In my travels I’ve noticed the various stages of how people live and die. All humans were babies at one moment in time umbilically – biologically and emotionally – attached to their mother. Who will be nearby at the moment of their death? What happens along the way for a society to allow poverty, homelessness, slavery, abuse, starvation, purposeful victimization and other forms of violence to occur? And, am I truly free when another human being struggles to merely survive let alone die, lost to anyone’s memory?

Compassion is what isolates and surpasses the predatory in the human animal and aids in helping transcend the physical nature of our inevitable transition. And, I hope it’s the imagery of our small successes and acts of compassion that out-live our mortal coil. Within the word compassion is the word passion. Compassion and passion are threads in the same fabric of human existence. How we incorporate them in our life helps define the meaning of living, dying and death.