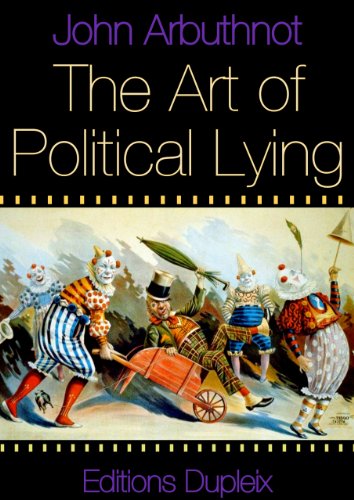 “The poets tell us, that after the giants were overthrown by the gods, the earth in revenge produced her last offspring which was Fame. And the fable is thus interpreted: that when tumults and seditions are quieted, rumours and false reports are plentifully spread through a nation. So that, by this account, lying is the last relief of a routed, earth-born, rebellious party in a state. But here the moderns have made great additions, applying this art to the gaining of power and preserving it, as well as revenging themselves after they have lost it; as the same instruments are made use of by animals to feed themselves when they are hungry, and to bite those that tread upon them…”

“But the same genealogy cannot always be admitted for political lying; I shall therefore desire to refine upon it…   There is one essential point wherein a political liar differs from others of the faculty, that he ought to have but a short memory, which is necessary, according to the various occasions he meets with every hour of differing from himself, and swearing to both sides of a contradiction, as he finds the persons disposed with whom he hath to deal…”

“Few lies carry the inventor’s mark, and the most prostitute enemy to truth may spread a thousand, without being known for the author: besides, as the vilest writer hath his readers, so the greatest liar hath his believers: and it often happens, that if a lie be believed only for an hour, it hath done its work, and there is no further occasion for it. Falsehood flies, and truth comes limping after it, so that when men come to be undeceived, it is too late; the jest is over, and the tale hath had its effect: like a man, who hath thought of a good repartee when the discourse is changed, or the company parted; or like a physician, who hath found out an infallible medicine, after the patient is dead.”