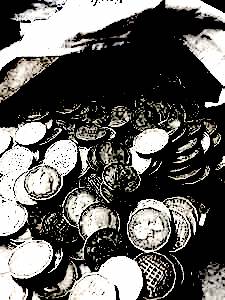 It was a Sunday. Driving.The Interstate. Less traffic, except for the number of semi-trucks and everyone else I encountered that had the same idea.

A few states later and miles of cropland my old sports car was cruising a few notches over 70 miles an hour. There was a thud that sounded almost like a blowout. The belly pan under my motor came loose and the front half bounced off the pavement.

I stopped by a fueling station and was reminded that mechanics are a thing of the past, so quickly planned to spend a night in a hotel. I don’t have a GPS on my car so I asked the attendant for directions as she was the one that mentioned nearby hotels.

As an aside, I’m not your average Cynic, a word that dates back to the ancients with a different take on its meaning than the connotations of today.

“Darling (that’s an endearing expression in these parts), turn right at the next exit off the Interstate, drive for several minutes or so until you see a fifteen foot tall sculpture, the Grinning Guru, at that juncture turn left across from the fast food restaurant and then approximately about a football field’s length down the road there’s three hotels to choose from. Good luck. You can’t miss them.” Her smiled was affixed on her lips.

Fifteen  minutes or so later I found the Grinning Guru. A sign hung from an  outstretched hand. It read “Isn’t it about time you became your own celebrity?”

I turned, drove down a narrow street and checked into a cheap but relatively clean hotel with a long name associated with a well to do family. It was the kind of place I decided after peeking into their cafeteria I would rather eat breakfast at a nearby coffee shop.

Monday. By 9:00 am I was at a dealership and after checking in my car was greeted by Roy who handed me a card with his left hand and slapped me on the back in one sweeping motion with his right hand.

I looked at his card. A quote underneath his name read, “Abundance is just a thought away.”

“Before a customer buys a car or I consider selling him one I like to get to know the person. It’s all about human relationships, wouldn’t you agree?”

“Thanks, Roy. I couldn’t agree with you more. But…”

“No buts here…I noticed you cast a glance at our new sports car. We can take her for a ride on this beautiful morning.”

“Thanks, I’m just here for a minor repair on my existing car.”

“You never know about the day ahead. It may vanish before you get a second look…I found you have to spend to receive.”

At that point the service manager approached, “Sir?”

I readily nodded at the break in the conversation.

“What was the year, model and color of your car you said you dropped off?”

“I provided it earlier. Why? Is there a concern?”

“Well, are you sure you brought your car to this dealership?”