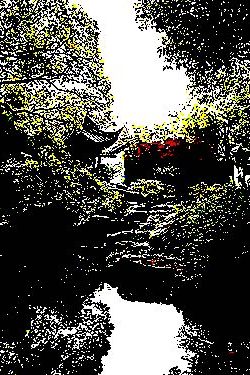 I grabbed a cup of coffee on my way to the meeting. I was the first to enter the room with its gray stone walls and a singular colorful medieval tapestry hanging from the wall opposite the entrance. The wide plank hardwood floors added a rustic tone to the otherwise ascetic atmosphere. A laptop computer was situated on a rectangular oak table in the center of the room with wood chairs on either side of the table. A floor to ceiling wall-sized arched window at one end of the room looked over a pond and a monastic style herb and flower garden that appeared to be larger than its actual size. A soft Gregorian like chant emanated from ceiling speakers.

My colleague entered the room and sat on the chair across from me with a cup of latte. “Looks like an interesting day ahead of us,” She said.

“Wednesdays generally are,” I replied.

“Did you see the document?” She asked.

I nodded. “Intriguing.” I turned the laptop computer around so she could read an added update.

After reading she looked at me, “I suppose it could mean just about anything we wanted it to mean.”

“Information can possess that quality.” I said.

“There are hieroglyphics superimposed over the words and numbers.”

“Sometimes our vison is impaired by our perception. The symbols suggest it is all an illusion.”

“Uncertain. I sometimes ask myself if reality diminishes my ideals.”

“Perhaps it’s the context of the time in which we live.”

“Context reinforces the sense of my temporal nature. I’m not sure if time has boundaries. I suspect I misconstrued the meaning of time subconsciously once I exited my mother’s womb. The moment the chord was cut I became anxious.”

“Well, I realize now that I was a non-being before my birth and will be so after my death.”

“Do you leave open the possibility of being mistaken?”

“Of course.  However…particles inevitably decay, stars burnout, black holes evaporate, humans turn to ashes. Nothing we are experiencing now is eternal unless it’s the energy released at death and does that energy have a memory and where does it go?”

“Do you think there’s a scheme to existence?”

“Do we, as the Danish philosopher, Soren Kierkegaard in Fear and Trembling suggests, make a leap of faith in the face of the absurd?”

“Faith in what? Is it rain drops on roses and whiskers on kittens?” (Rogers and Hammerstein II)

“Harsh but obvious. The surface of things is more appetizing to the senses than what exists beneath the surface.”

“I’m not literate enough on the behavior of atomic and sub-atomic particles.”

“Can’t put my finger on it either. That idea does remind me.”

“I have to see my first patient in about ten minutes.”

“My patient? I’m meeting with your patient’s lover.”

“You mean the politician turned theologian or…?”

“They are not who they say they are.”