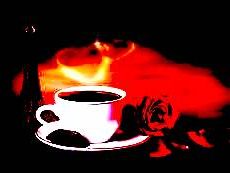 I took a slow sip of my hot café latte as we sat on wood chairs next to a small round table beneath a large outdoor patio roof watching the heavy rain wash our rented cars. My friend from the city adjacent to the Canal Zone ordered a cup of arabica coffee from beans grown in the highlands of Panama, no cream or sugar. She had called to meet me. Her voice was anxious. I bought her a rose and set it next to her coffee. She smiled in gratitude.

“What happened?” I asked her.

“I had unsettling dream three nights ago I can’t seem to discard.” She said, her eyes twitched.

“I’ve had those before.”

“Not like this…it was if I was walking through a heavy mist with only glimpses of what was unfolding before my eyes. It’s ironic I suppose as the dream occurred in the middle of an otherwise clear, moonless night.” She said.

“In one flash I was looking through a fog toward a modern building made of unusual marble but I couldn’t fathom for certain as it seem to take on different shapes each time I gazed at it. In the next moment I was inside the building. I was greeted by a clerk who knew me. I had gained substantial wealth after years of toil, though my funds were locked away in designated numbered accounts and locations he told me, and then he handed me two keys.”

“In the dream my passwords and identity to access my funds were somehow missing. It was as if my money and I didn’t exist except for the clerk who recognized me but now vanished as did the keys.”

“Dreams can be rather extraordinary.”

“Do you think nature knows not only that we are looking at a thing but also, that we are planning to look?”

“Is it a matter of Quantum Physics? I mean is there something behind your dream in terms of your consciousness? I asked.

“Consciousness? Can I create my dilemma or solution merely by thinking or meditating about it?”

“I don’t know. Does the very act of noticing a thing produce the thing you notice? Is that circular logic? Again, I’m not sure.”

“Objective reality is complicated.” She observed.

“Could it be that your wealth is an illusion? But then what is the meaning of the keys?” I queried.

She shook her head with a tear forming in one eye. “Can I experience something that doesn’t exist as if it was actual like seeing you now? Though there is the thing bothers me that I haven’t told you.”

“I checked my bank accounts this morning. All my money had been withdrawn four days ago.” She stated. “I didn’t withdraw any money, I swear.”

“The day before the night of the dream? What do you think happened?”

“Excuse me Sir, is there something I can do?” A waitress interjected.

“I noticed you’ve been talking for some time to the empty chair and cup of coffee with what looks like red lipstick on the rim, across from you.”