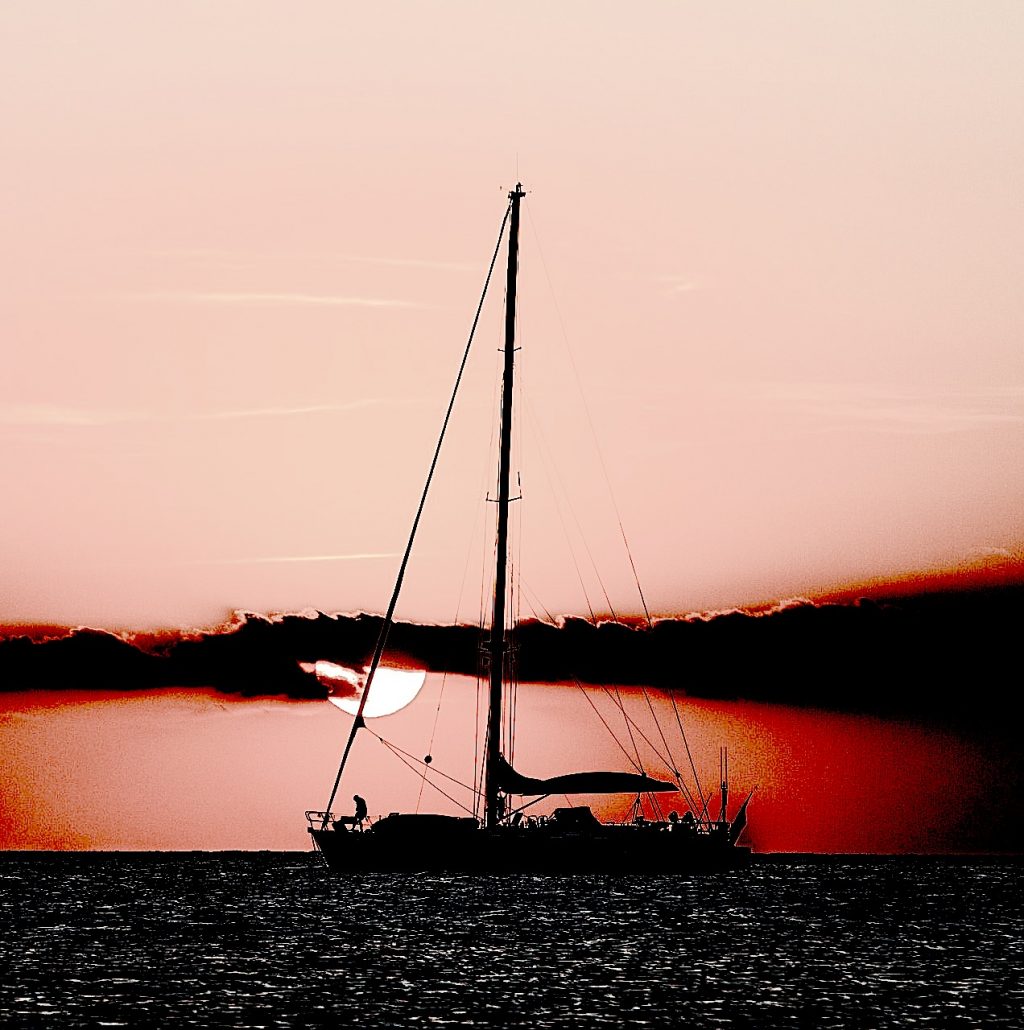 After parking my car and loading our baggage on the ketch we set sail. South. Along the East Coast a few miles from the shoreline to an island in the Caribbean. I noticed when we boarded the boat there were already several crew members in place. A few days into the voyage we felt the trade winds.

That evening my partner hugged me. “I know originally we devised a very pragmatic scheme. I didn’t want to muddy the water, so to speak. The night before the releasing the bank of a burden I received a call from a doctor who invited us to his home. So I knew of the possibiltities in advance. You know I like secrets. It was the nature of my upbringing.”

I nodded. “You could have…”

“Let me explain. I was an adopted child and learned not to trust too many people. I felt like I was living on one of your abstract canvases waiting for another artist to add some texture for meaning to my life. You came into my life and encouraged me to be more in control of my own destiny.”

“Thank you for your kindness. My life is also like my art and possesses an existential quality, colorful at times.”

“I should mention something else.”

The mustachioed man in my father’s bank was my ex-husband.”

“I didn’t know you’d been married.”

“It lasted for a few years though his religion and philosophy of life was more different than I originally assumed. He was a defrocked preacher of sorts which shouldn’t have made a difference. Except he held on to past memories. He didn’t or refused to understand my thinking. Judgment without cause.”

“Yeah. Did he make the sign of the cross when you were leaving?”

“Interesting. We were both sitting in the attorney’s conference room. He announced I was the first Black Asian woman he ever dated and made the sign of the cross. It was very awkward. My natural father’s ancestors were from Benin and my natural mother’s ancestors from China. Both were killed in an accident at sea. I was an orphan at fourteen and was adopted to my surprise.”

“Psychologically, the pain and pleasure we have in life are woven as I’m certain you know.”

“Ambiguity makes for a fascinating life.”

“And the cut diamonds I found in the box?”

“The bank deposit box with the diamonds was my father’s under an alias. He had three boxes. I can’t explain the gun or what’s in the other box.”

“And, about your father?”

“Before being a banker he was a reformed rabbi and it was not his passion and the politics of the synagogue was a bit too much. He was and is much better at finance.”

“And the place we are headed?”

“Yes. I have returned there several times to study.”

“What do you study?”

“Haitian Vodou or Voodoo as it’s commonly referred to. It originated in Benin.”

“I’ve traveled around the world but…”

“I promise to hold your hand when necessary,” she said a few days later as the  boat entered the harbor.