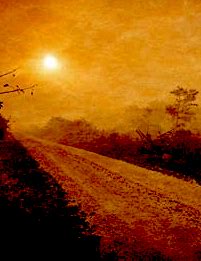 August of this year. My driving companion and I were on the road at dawn. Waves of heat rose from the pavement until a tropical like rainstorm passed over. A detour. A dirt road. The dark clouds of insecurity, this too shall pass echoed in our minds, the sky began to clear, dis-enchanted shadows vanished. An all too familiar ball of light appeared in the distance. We turned the radio channel but there were no reported bombings. We agreed it must be effects of the sun and the dissipating rain clouds.

Radio Voice: “It’s been reported that it was a bombshell.”

My companion and I looked at each other.

Radio Voice: “We’ll return to this fashion scene explosion after the commercial.”

“I wonder if people develop post-traumatic symptoms in the world of fashion?” My companion asked.

“How long do you think it will take?” She asked.

“Another hour or so.”

A mile from the crossing, I looked over at her. “Well?”

“I mixed them in with the fake jewels.”

“What about your politician husband?”

“Okay.  I’ll drive until we get to the juncture. Do you have the papers and passports?”

‘There in the briefcase.”

“Did you look at the papers?”

“Haven’t had time. It was all so last minute.” I said reaching in the briefcase.

“Sorry. Look closely. Your name is the same, mine is different.”

I looked at the papers. “Intriguing name you’ve given yourself.”

“Yeah. Also, my real photo. The name and photos I had in Washington were fake.”

“I would never have guessed, but your hair in this photo…”

My companion interrupted, taking off her wig, “Sometimes our identities are similar to both fake and real diamonds. They require closer examination if we want to know what’s underneath and the truth.”

“When we get to the hotel, I’ll tell you.” She smiled.