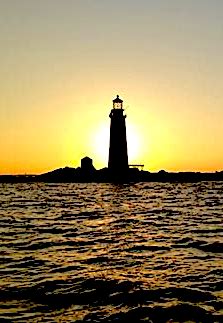 The feint sound of rain danced somewhere beyond my closed eyelids. My body was covered in sweat. My chest expanded and contracted. Breathe! My mind kept repeating the same question – why now? Was I dreaming? It had to be a dream. A segment of the dream flashed in my brain. I was in a lighthouse standing in front of a person in a tailored suit. She or he was trying to tell me something while holding an object in their hand. I leaned forward to hear them and see what they were holding. Sweat dripped down my forehead and cheeks. As I got closer the person vanished.

A gust of wind rocked the boat. The hull creaked. Then all was quiet. Opening my eyes, I glanced up at the teak ceiling and slipped out of the bed, walked through the narrow galley, noticed certificates and passports on the dining table and climbed the steps to the deck.

The morning sun was now beginning to shower its light on the boat. Herring gulls skimmed the surface of the salty, glistening, blue-green harbor waters. Breathing in the fragrance of the sea I felt a hand on my wet shoulder.  Startled I looked over to the person that came up from behind me.

“Nothing to forgive…thought I was the only one aboard.”

I gazed at her. She was striking and familiar.

“Do you remember last night or the night before? Or further back” She asked.

“Well, I’ve read our passions are what keep us going, especially when we are caught in the turbulence of parallel universes and sense an ending is near. And in this case those universes were and are expressions of different realities.”

“That’s natural. You’ve been under the weather for a few days…since… well, since that day.”

“Yeah, when the people that you were surrounded by spoke out of both sides of their mouth and you found yourself in two alternative realities at the very same moment and then you were approached with an otherworldly explanation with an object pointed at you…well….it takes passion, imagination and courage to bridge those differences without going under.”

“That’s understandable. Look around you. The harbor. The small city in the distance.”

“We’ve been sailing for three days. I steered us into this port last night. We still have a distance to go.”

“What happened to me? I mean…”

“It’s not only you. It’s us. Everything you thought was real that surrounded you like a blanket but discovered it wasn’t a blanket at all – at least not a cloth of comfort. I think we’re safe for now.”

“There were passports and some type of certificates on the dining table. I’m sorry. I have to ask. Who are you and…the certificates?”

“That’s amusing. I’ll tell you after we have some coffee. I’m just glad you’re… shall we say…awake.”