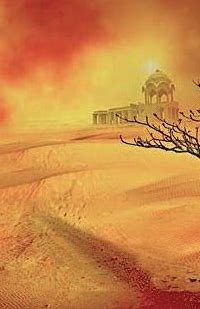 The sun’s rays pierced the landscape beneath the dusty blue sky that engulfed all in its dry, fiery heat as well as the imaginations of two near strangers. This was a new place for two people who had only met once before. A green screen where two hearts would create the script. It was a spontaneous last-minute decision to meet. We had chatted through Zoom and text messages after meeting at the science museum weeks earlier. We were two strangers quietly connecting at a round table of archeologists focused on ancient dwellings of worship with emphasis on a little-known prophet.

There was a stark remote quality to the dirt tracks stretching out before us and disappearing into the rising shimmering tide of the earth’s fever. A few hundred meters later, stopping our vehicle, we decided to hike over a nearby ridge. From the top of a ridge, the loamy, sandy expanse of soil washed up against a conspicuous sanctuary, a sculptured temple.

Glancing at my companion, I thought of the deep blackness of her skin juxtaposed against the light beige of my body and its undecided countenance.

Shali looked over at me as if knowing my thoughts. Her lips smiled. “Life spills over with contrasts. Do you think this might be the place?”

“By all means.” She replied.

We carefully made our way to the edifice.  Reaching the entrance to the structure we made our way through large aging and splintered hardwood doors. Once inside the inner room Shali touched my arm. We then grasped each other’s hands. We stood frozen as we gazed upon a body lying in state on a platform. We had become visitors at an ancient and mock funeral home for a person awaiting burial or cremation.

“I noticed it too.” Shali acknowledged.

The smell of sandalwood incense infused the air. We decided to approach what we thought was a replica of the body, I asked, “Is it the one we read about?”

We were now standing next to the body. “I can’t tell who or what it represents or is symbolic of…wait. Look closely at the face.”

Shali nodded. “What do you think we should do with the body?”