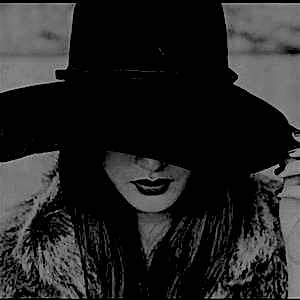 It was several hours into a chilly post meridian. My mind danced with the poetic illusion of the sun descending on the western horizon.

Standing on the subway platform I watched the train pull into the station.

The doors slid open. I stepped away from the human traffic exiting the car when I noticed her. She was watching her footing, then looked over at me. A smile emerged from her dark colored lips. She slid her aviator sunglasses down a notch on her delicate nose for a second to reveal a question in her eyes. A black wool floppy brim fedora hat covered her forehead.

My mouth opened. Only the steam of my breath emerged. She appeared to pause in mid-step several feet in front of me, bit her lower lip, then vanished in the streaming crowd.

I glanced back at her to catch sight of her hat and boarded the train to exit a station away. I was meeting a new colleague at their request after a quick stop at a bookstore.

Being helpful assuages my emotions. Even if just for the rationalization. It makes me feel good about myself. The act motivates me to get up in the morning and take the chance of walking out the front door.

The colleague was an assistant professor of anthropology. She left a message suggesting it was urgent. So we met at a nouveau wine bar, a short-distance from the federal courthouse.

The lighting was dim enough. It was visually hard to make out faces across the room let alone the person next to you. A Thelonious Monk recording was playing in the background.

Greeting me wearing dark horned rim glasses, her long fingers grasped my hand with a lingering grip as if she didn’t want to let go. “I know this is sudden but I had an experience on a very recent trip to Spain.”

“I met someone in Madrid. A researcher who was into mysticism…asked me about a Spanish woman who lived during the Renaissance…offered obscure details about the woman’s life, thinking I might recognize her.”

“The researcher then asked about you. Whether you knew anything about this Renaissance woman.”

“The researcher knew where you were born, your relationships, studies and your daily habits.”

“Also, knew what was going to happen to you in the near future.”

“No. Something else…well, was mentioned though.”

My colleague looked at me. “Apparently the Renaissance woman and you both share something in common…an occurrence in your past,” she said In a hushed tone.

We looked at each other. No words exchanged.

As the jazz music played she touched my arm and then my hand, “Brace yourself.” She then kissed me on the cheek.

A person walking by brushed up against my back. “Sorry, one has to be careful in finding one’s way through the dark,” the voice said.

Turning around I didn’t see anyone. I looked back at my colleague. The look on her face was enigmatic.

I finished my glass of wine and excused myself. “Restroom,” I said.

When I returned she was gone.

“She paid for your drinks,” the bartender said,

I then noticed a pair of aviator sunglasses and a black wool floppy brim fedora hat on the bar stool.