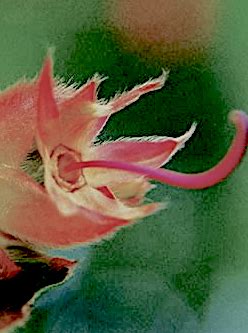 “It’s not what you think,” she said as she stretched her long legs under the teak patio table letting them rest on a chair with her high heels dangling from her toes. She adjusted her translucent blouse that was tucked into her blue jeans, briefly tilted her head back on the cushioned chair looked up at the blue sky and inhaled the unusual balmy air drifting over the trees as the leaves of Autumn tumbled to the ground. Her wavy natural red hair hung over the chair’s back. Leaves make good fertilizer she thought as she then repositioned her head and focused her gaze at a distant mound of earth near a woods and then to a flower in a garden next to the patio.

“Seldom ever is,” her friend interjected. “Suspect he thinks he has a highly adaptable mouth. He plays with words and sticks his tongue in the wrong places and spews the saliva of his reality. People believe him. I mean his tongue, he boldly stated on many a occasion, was in the Guinness Book of World Records. Of course, things can get rather unsavory if not nasty I would suppose depending on the role one’s playing and the hole in which one dips one’s tongue.”

Smiling, “I suppose you’re right. I didn’t know at first. Perhaps I did and didn’t want to admit it. But one learns over time.”

“Personally, I preferred not be on the receiving end of an emission.”

“Ha. You know when I entered his office yesterday there were stains on the rug.”

“Did the authorities find the body?” She joked.

“It was disposed of.”

“Oh. Well, he was considered rather cunning…until he was introduced to your twin sister from Dublin.”