The following paragraph is based on an actual occurrence in Scotland during the course of my global journey. The rest is open to conjecture. 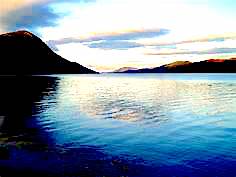 A few decades ago in the spring of the year I stayed at a bed & breakfast across from the inland water, once connected to the sea,  known as Loch Ness in Scotland.  The bed & breakfast was owned by a widow of an older sea-captain who went down with his ship during WWII. I was one of two overnight guests at her home. The other gentleman was a “Bobby” or police officer from London whose voice reminded me of the British actor, Michael Caine. He could have been a relative for all I knew. I didn’t know and didn’t ask. Was none of my business. But like a typical adventurer who had already spent years in Asia, the Middle East and Europe I found as an existentialist I had a lot of questions about the existence of things. My obvious question was whether there was an actual sea serpent seen by the locals? Well, she invited me to talk to the priest across the road who saw the serpent eye to eye a few years before our intimate chat.  Her story gave me chills and raised the eye brows of the Bobby who was also listening to her as we sat sipping tea at the dining room table.

Now here’s the where things can get confusing between perception and reality.

There’s a local pub near Loch Ness. The following afternoon I visited it, where I met the priest. I asked if I could join him. He nodded. I began asking him some questions after I introduced myself. I told him where I was staying for a few days.

Sipping a pint of dark ale he looked at me and simply stated, “I know what the truth is. I saw it with my very own eyes.”

“What did you see?” I implored and then caught myself sounding a bit anxious.

“You wouldn’t believe me if I told you.” He said. “Most tourists and vagabonds like yourself don’t believe until you see something with your very eyes and then question what you actually saw. We see and hear and then we question what we see and hear. We believe what we want to believe. And to the devil with the facts.”

“Well,” I said, sounding somewhat defensive I suppose, “I never thought of myself as a vagabond. I like to think I’m just a natural seeker and explorer.”

He laughed. “Seeker and explorer is it?”

A few other men and women at the bar laughed as they were listening into our conversation.

“Grab your pint of ale and let’s walk over to the shore’s edge.” He requested.

I grabbed my ale and he and a few others with ales in hand walked over to the edge of Loch Ness. We sat down on what appeared to be grass and he echoed what a person behind us noted, “It’s about that time the serpent appears. Dusk.”

There was a chill in the air and the sun was still visible on the western horizon. We were seated on the southern end of the Loch Ness.

Eyes watched the surface and the priest and I conversed probably for an hour while sipping our pints of ale. The pub’s waitress with impeccable timing arrived with a jovial smile carrying a tray with fresh pints of the dark brew to satisfy our spirits. 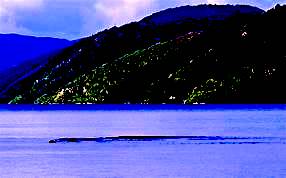 The sky was becoming a deep blue when the calm waters exhibited ripples on its surface. The agitation appeared less than a hundred yards off shore. And then a two-foot wave rose out of the deep. And as quickly as the wave became visible it disappeared and the waters became calm again.

My jaw dropped. “Was that Nessie ? I asked.

The priest said nothing, He simply made the sign of the cross, across his chest.