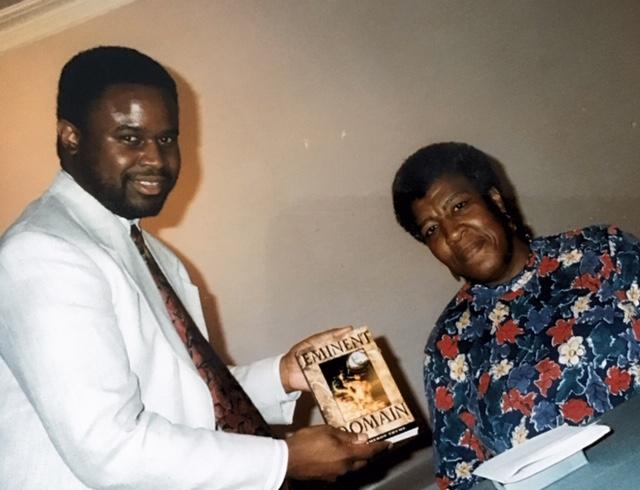 How many people can say, “I met science fiction author Octavia Butler”? She once invited me to share the podium for a panel with her and another science fiction writer. I declined because I did not feel that I had the stature to own that third chair on the stage. I didn’t think that I belonged on that stage. She beckoned me several times. I didn’t feel that I was ready, so I didn’t go. It had not yet dawned on me how rare it was to have an African American science fiction writer expressing ideas and interest in my beginnings as a writer.

I believe that the first time I learned of Octavia Butler was in 1994. I had just begun writing and told a friend, knowledgeable about the genre, that I had an idea for a science fiction novel and had started to write one. He asked if I knew of any African American science fiction authors. I said no, but I imagine there were not very many, perhaps twenty or thirty.

He held my gaze and said, “No. There are only 3: Octavia Butler, Samuel Delany, and Steven Barnes. That’s It!”

The first Octavia Butler novel that I read was Wildseed. That was the beginning of the Patternists Series, which I loved. I’m a slow reader; I don’t speed read. I prefer savoring each word, but I finished that book in 48 hours. It was different thematically than anything that I’d seen or read before.

I think what captured me almost immediately was the fact that it took place in West Africa before colonialism. Wildseed struck me as such a pure African story not influenced by western civilization defining African ethnicity, spirituality, mutation, and technology. The two main characters were unique—one a nurturer the other a predator, two natural counterparts to one another. I thought it was fascinating to watch them find their way through the loneliness and isolation of being different. I loved how Butler grew their troubled relationship and developed the story arc across the series. It was just a beautiful story.

I tackled this saga in the early years of my practice when I saw twenty to thirty patients a day. I had a small daughter with another child on the way. Despite the hectic schedule, I still found the time to pick up and devour, Mind of My Mind, Clay’s Ark, and the Pattern Masters, the sequels to Wildseed. I couldn’t put them down. I read deep into the night. I came home from work and continued reading until I finished the books. Butler’s novels were relatively short, but what she conveyed in those few pages was phenomenal.

When I read her books, I felt like she wrote sentences like an artist painted portraits. The details are akin to examining great artwork, the keystrokes, word after word like the shading—of a skilled pencil sketch—those wonderful short sentences. Before you realize what you’re enjoying, subtle colors are invading those simple black and white words, paragraph by paragraph, page by page, until an unexpected total picture burst through in all its living colors.

This is what lifts her literary works to the level of genius.

And then, I met her. I was with my wife, Carla, when we first encountered Octavia Butler at Atlanta’s Black Arts Festival in 1996. Octavia gravitated towards my wife, who has a beautiful presence. However, once Ms. Butler discovered that I was the fledgling writer, she and I began to talk. She asked me those usual few hard questions that most writers get asked. I said, “I just decided one day that I thought I could write a book. I had read science fiction novels, loved them, and I thought I could write one.”

I did not know any science fiction writers. Because I had no mentors and no experience, I did not realize what I was missing as a writer. In my naivete, I gave Octavia my work to critique. And she did. I didn’t know what the journey of a writer was in general. At that time, I had no clue how to respond. I just floundered. I believe she found some merit in my writing, but she also recognized that I wasn’t ready. I disagreed with what she conveyed at first. Like many novice writers, I was sure my story was the GOAT (Greatest of All-Time). I guess she thought that it had some value. She chose her advice thoughtfully and said, “Sometimes, you need to place a manuscript in a drawer and close the drawer for six months to a year, then take it out again, reread it, and then begin the real work.”

Octavia shared her phone number and invited me to call her, which I did a couple of months later. And in her kindness, she offered me a connection. We had a quiet conversation.

Some of my answers she liked, and others, I could almost hear her giving me the “tsk, tsk” over the phone, but she never did that. She offered me advice. She shared her experiences with me, those parts of her life that were personal, and her journey as an African American writer.

She asked me if I knew anything about the Clarion Science Fiction and Fantasy Writers’ Workshop. I didn’t at the time. As a novice writer, I was being offered a chance to learn from one of America’s greatest science fiction authors. The only way a writer gets into that workshop is when he is sponsored by a faculty member, like Octavia Butler. I didn’t know that either. I later learned that it is an elite workshop for science fiction writers. From what I can recall, I think it is a six-week workshop. That was more time than I thought I could steal away from my career.

She told me, “You’ve got something here. But you know, you could benefit from a little bit of, you know…” I can’t remember how she said it. She didn’t say coaching. But she essentially explained that I needed mentoring. Dragon’s Heir: An Archeologist Tale took me over twenty-five years to write, and is the novel Octavia critiqued.

What most surprised me was how she embraced me not only as a writer but as a human being. She listened patiently as I gushed about my newborn son and family. I wish that I had maintained a relationship with her, but didn’t because of my professional obligations as a physician with a new practice.

She was a rare combination of things. She also had a unique talent as an orator. She was philosophical. Not all writers have that gift of being able to talk about the world. You can write something beautiful but expressing the intentions of that writing is a different kind of skill, another type of talent. And she had it, boy, did she have it!

You can’t compare writers in terms of who’s better. They all have different styles. I’ve read Steven Barnes’ Street Lethaland Samuel Delany’s Babel 17 and Stars in My Pocket Like Grains of Sand. Their novels are beautifully written but very different from one another. But Butler’s work, for me, is unique in terms of its simplicity. When I settled into a chair to read her books, those short little sentences with a lot of simple little words, common everyday words just drew me in. I never got that feeling of, “this next chapter or passage is long and heavy; I’ll pick this up tomorrow.” No Butler’s weapon was those short, simple, little sentences. She didn’t use a lot of big fancy language. I almost never had to go to the dictionary to read her books. You always felt as if you could read just a little more and stop, just a little more then stop. Once, when I finished one of her books, I thought I knew how a fish felt after being played and caught by an expert fly fisherman. “I thought I was in control!” That was her skill as a writer.

Octavia Butler is not seen as a purist in the field of Afrofuturism embracing the term and exploring the black speculative arts from a perspective that encompasses the African Diaspora and a world view that embraces the fluidity of that heritage yet investigates the cultural aesthetic at the intersection of the African diaspora with other cultures with technologies that seem both mundane and exotic.

Science fiction, in general, is about exploring “What If”. That what if is slightly different depending on your background, your experience, the restrictions on your choices. Afrofuturism pursues that what if contingent through the lens of someone who grew up in the African Diasporic community, whether it was pre-colonial, devastated by imperialist exploitation or subjugated, captured and trudging through indignity and denial of basic humanity for generations. What does “what if” look like for someone with that kind of psychological baggage in tow?

Octavia began writing in the seventies. Even as a teenager, she recognized these nuances of the African-American experience and how they differed from her peers of other backgrounds. Here we are now, fifty years later, and young people, older adults, middle-aged readers are just discovering her work, and it’s not just limited to the African American community. Her novels include many African American and African characters, but she represents the entire human race in her writing, which I appreciate. Octavia Butler opened the door for African Americans in the field of science fiction, not just me, but for so many creators like Reynaldo Anderson, Sheree Renee Thomas, N.K. Jemisin and Ta-Nehisi Coates.

Dr. Ayana Jamieson, the Octavia E. Butler Legacy Network founder, has painstakingly preserved and promoted research and scholarship on one of the preeminent science fiction and fantasy writers of the 20th century. And with that, I feel that my journey has circled back to its beginning. And thanks to Octavia’s encouragement, I am ready for that stage, albeit humbly, and ready to continue my journey as a writer.

On November 8th at 2 pm (PST), I will be telling my story as one of the panelists on a 3 Part virtual Series titled Afrofuturism and the Black Speculative Arts. The program will include Samuel Delany, the winner of four Nebula awards and two Hugo Awards, for his Science Fiction excellence; and Dr. Ayana Jamieson.

This will be an opportunity for lovers of science fiction to share their thoughts.

To register in advance for this program, please click onto:

https://bit.ly/30fthgf. After registering, you will receive a confirmation email containing information about joining the meeting. 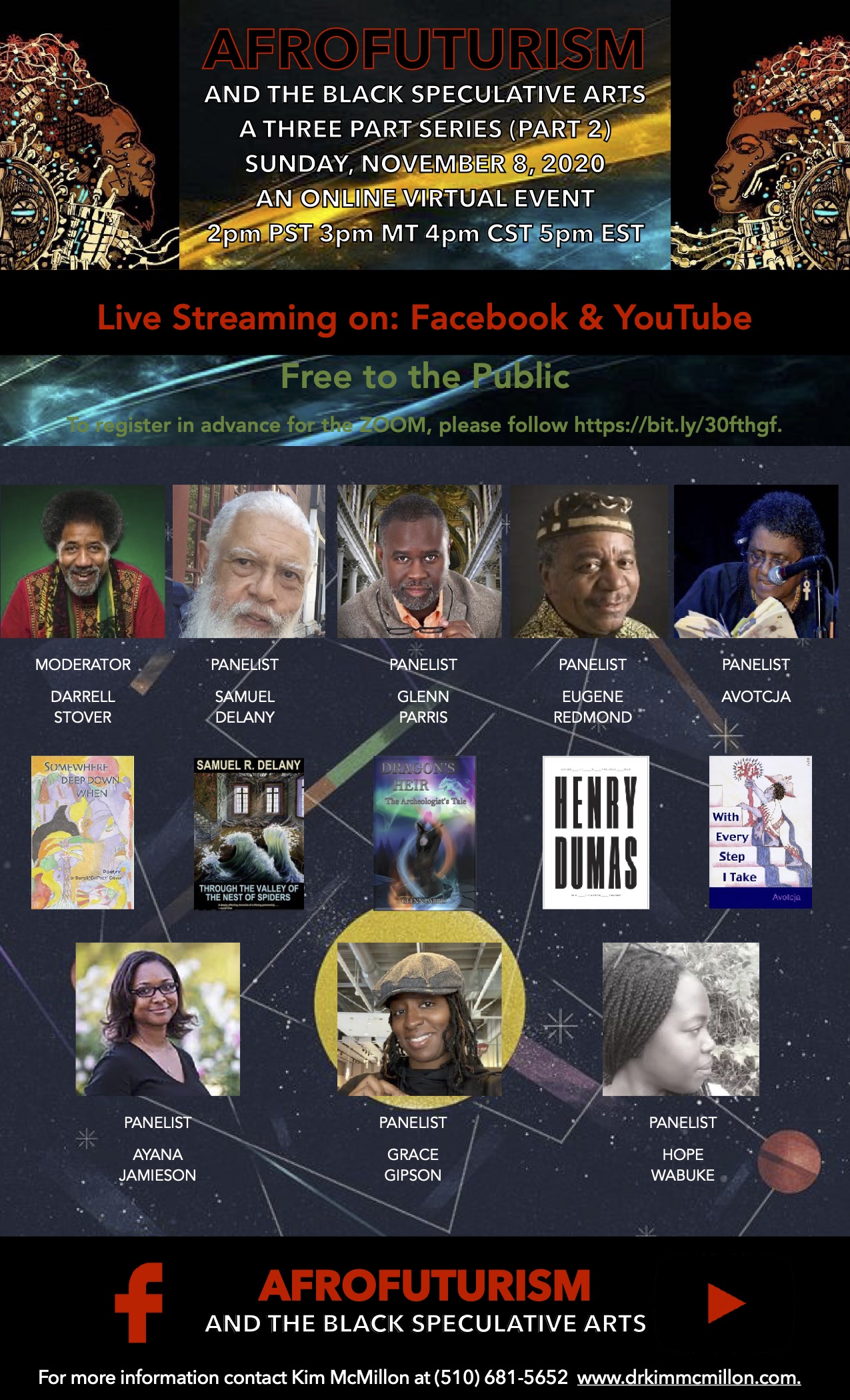