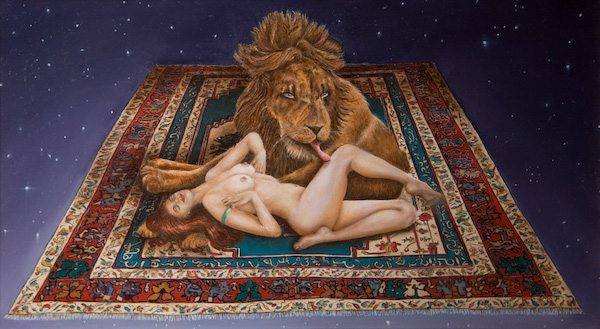 Painting: Together Again, by Uriél Dana, oil on board, 1996

When an artist stops painting, it does not mean they’ve stopped making art. It usually just means they’ve said all they can say on a particular subject.

Life can strike us with an experience and a new series of work can be birthed to the world in an instant. Painting a series can sometimes be the only way out of being emotionally frozen. For example, Picasso entered his Blue Period after a close friend committed suicide.

In 1995 I flatlined during a surgical procedure. I found myself in 16th century Bengal India, dying from a fall down a flight of stairs. The details of that out of body journey were life altering for me. I began dreaming in Sanskrit and Chinese; could understand the lyrics of any language in song; could suddenly play a tamboura; chant in mantra; and I could smell when people were about to die. I also started painting miniatures, Left-handed. Did I mention I am Right-handed?

The miniatures I painted (and the accompanying poems I wrote) were, unknown to me, a specific genre of work called “Sringara Rasa” and that is how I still refer to the series.

The art tradition of Hindu miniature painting came out of the 14th century renaissance in Central India and continued to thrive into the early 19th century. The Mughal Empire had destroyed medieval Hindu kingdoms and history begins to see the emergence of indigenous literature enter the mainstream of society.

Prior to this renaissance, the priests and nobles controlled all exposure to these great spiritual epics. (They were the only ones who understood Sanskrit).

These stories captured the minds and hearts of people, especially the love between the celestial lovers, Krishna and Radha. Radha was Krishna’s favorite consort and she became transfixed by a passionate obsession for him. To me, the allegory was clear: Radha and Krishna represent the Shiva and the Shakti, the male and female aspects of ourselves, longing to reunite with one another.

Krishna and Radha’s love inspired great art, poems, and music and marked the beginning of devotional Bhakti cults. (People who attached themselves to a personal deity).

Many of these stories inspired their followers to live out their lives in imitation of these Gods. The painters of the time found their subjects from these great poems. Many were inspired by the work of the twelfth-century Bengali court poet, Jayadeva.

As a person who loves living surrealists, I became inspired, no, obsessed, by the people who embodied the divine grace and ecstatic love of these Bhakti cults.

One of my favorite stories was of a young prince, Raja Savant Singh of Kishangarh (1699-1764), who abdicated his throne and became a poet and painter. He ran off with the courtesan-poetess Bani Thani, and they lived out their lives re-enacting the lives of Krishna and Radha at Brindaban, the holy city associated with Krishna. His brother may have taken the throne, but this young prince became quite well known under his nom de plume as a poet, Nagari Das, and the beautiful Bani Thani still lives in his paintings that survive.

When I finished the first painting of this series, “Together Again”, I felt it need a poem with it, so I wrote one. Each additional painting had an accompanying poem. I later discovered that the form of poems I was writing was classic 16th century Bengali love poetry in the tantric tradition.

My research led me to a 16th century princess that had been born in Rajasthan and was to be the first Hindu queen of medieval North India. She was widowed before her husband, the heir apparent, took the throne. Her name was Mirabai, and she was the embodiment of Bhakti.

At a young age, Mirabai had experienced a spiritual transmission, or murti, from a statue of Krishna presented to her by a wandering and low-caste ascetic. She became so connected to her God that he was with her always in a kind of “spiritual marriage”. She wrote over 400 poems and created a type of devotional song now known as bhajans.

Although Mirabai’s in-laws persecuted her for her spiritual beliefs, and she was highly controversial, she was revered by her peers and honored by kings in her lifetime. Mirabai had everything, but chose to live the life of a yogini.

As a painter, a poet, and a practitioner of Tibetan Dream Yoga for decades, I could not end this series until I understood everything about this art form in history. It reflected something very personal to me in my own awakening. Mirabai’s poems speak of someone who understood the inter-dimensional quality of dreams, and she often wrote of her lover Krishna visiting her in these worlds. There is a line from one of her poems that still wrenches my heart when I hear it; “I slept for a moment, the Beloved appeared, when I rose to greet him, he was gone. Some lose him sleeping, I lost him awake….”

I have a kingdom deep within

Where the veils of illusion

are pale and thin.

Light and dark merge into grey,

And love and ecstasy begin

The King and his Queen

We know only love,

no pain or fear.

Our dream is a magic carpet ride

Where all worlds are one,

And when the dream is a waking one,

Will you know by my eyes

that I have come?