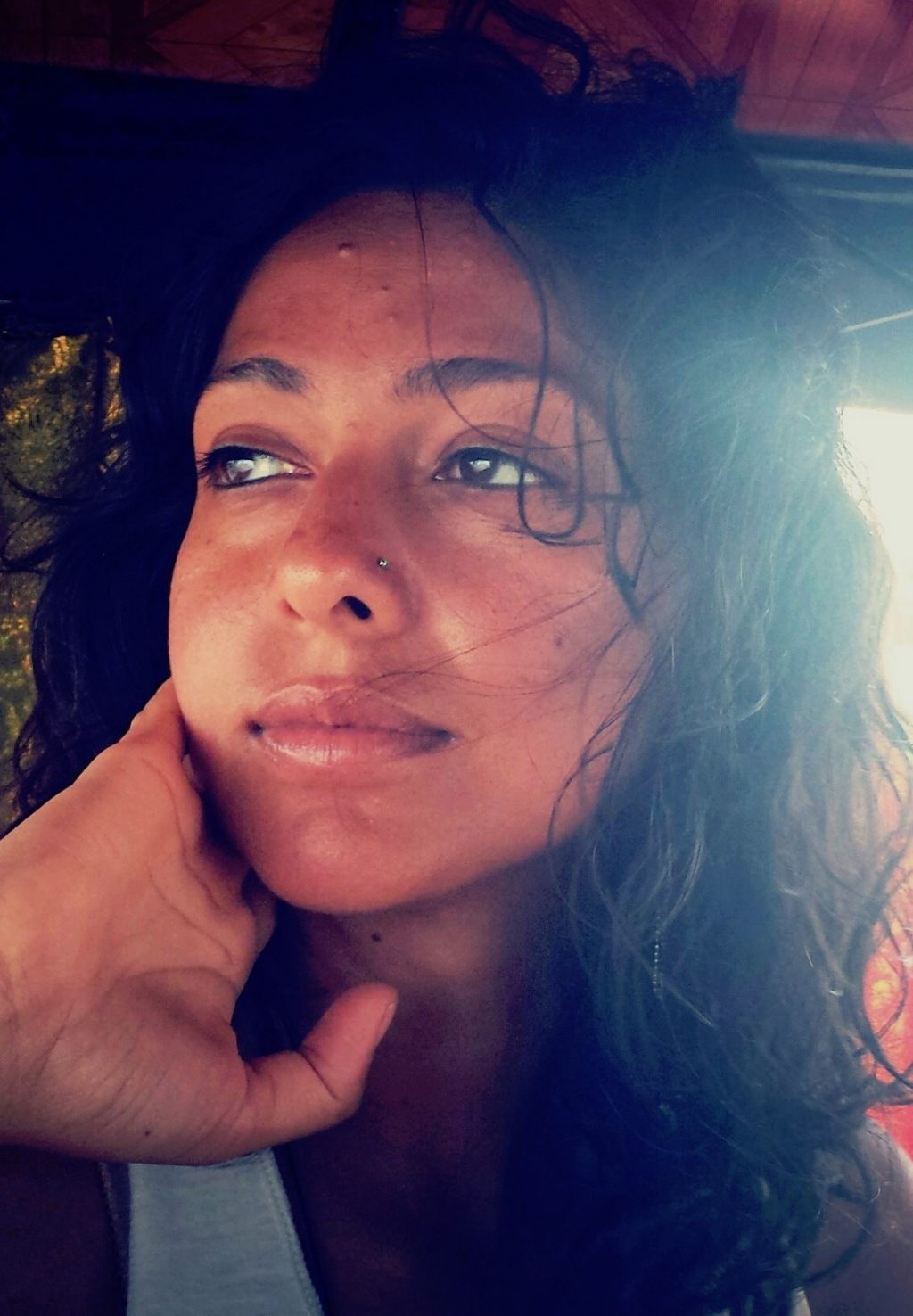 U.S. Army veteran, Satinder Kaur, is a writer and director who has lived a story-filled life. By the time she was twelve, she had lived on three continents and spoke four languages (Hindi, Punjabi, German and English). Her experiences in the east and the west provide her with a global perspective and contribute to her artistic voice which is uniquely American.

Her short film Blood and Glory premiered at Tribeca Film Festival 2020. It also won the Grand Prize in the Women in Media CAMERAderie Initiative. Kaur is a fellow of the Writers Guild Foundation’s Veterans Writing Project. Her short film The Last Killing produced by Ensaaf won the best short documentary award at New Filmmakers LA and the Amnesty International Best Human Rights Short award. In partnership with Ensaaf, she spearheaded the largest human rights video advocacy efforts in Punjab, India by traveling extensively and interviewing survivors of torture and families impacted by enforced disappearances. Kaur received her MFA in film directing from USC School of Cinematic Arts where she was the recipient of James Bridges Award for excellence in directing.

For further information on documentaries and work please check the following website:  https://satikaur.com/

NP: Please elaborate on how you came about wanting to become a filmmaker – writing, producing and directing. It seems to be more than just learning skills but a passion and spirit deep within.

Kaur:  I think that’s true for all filmmakers who are actively pursuing this path. There’s something deeper within that pushes us forward against all odds. For myself, there was never a conscious decision or a particular moment when I decided to become a filmmaker. From my earliest memories, I remember just knowing that this is what I was supposed to do with my life. I had no idea how I would go about becoming a filmmaker.

So pursuit of filmmaking has been somewhat of a spiritual path. It has taken great faith to trust this intuition and protect it from all the voices around me that told me that I shouldn’t pursue this for various reasons. Some voices were rightfully concerned about having a financially secure future and other voices didn’t think that a woman would make a good director. I was told that men are natural leaders, and women, especially Asian women, didn’t have those qualities.

Time and time again, I’ve seen the power of storytelling, its ability to transform hearts and minds and bring about healing and change. I hope the stories I write and the stories I live, all contribute toward shifting people’s perception and making this journey easier for the next generation of dreamers.

NP: You served in the US Army in the Middle East at the time of 9/11/2001. Did serving in the military affect you, what you witnessed and your approach to later filmmaking? How so?

Kaur: I turned eighteen two weeks before 9/11. Immediately after, hate crimes against Sikh Americans and many other communities increased. I remember my parents giving me American flag stickers to put on my car and an American flag to hang in my dorm room. To show people “oh we are American too, please don’t target us.” That was an awakening of my political consciousness. Then the invasion of Iraq happened, and I found myself deployed to Baghdad. Being a witness to the war has greatly influenced the stories I tell.

Right now, I’m interested in making a war drama that’s not about the making of an American hero, but rather about the holistic perspective of what we lost in Iraq.

My current feature project, Arresting God, is a story of a friendship between two women. One is an American soldier and the other an Iraqi refugee living in America. They must overcome their personal prejudices and work together to change the hearts and minds of their small conservative town in order to build a war memorial that honors both American soldiers and Iraqi civilians killed in the war.

This is a film about memory. Who gets to be remembered? Whose story is told? And the many ways a collective memory is constructed through monuments and memorials.

Post 9/11, Sikhs became the first targets of revenge killings. Even my parents were called “terrorists” and told to “go back to their own country” while I was deployed to Iraq. This will be the first film that explores our complicated relationship to a country that doesn’t always see us as its own. I hope this film will come into the world as a politically charged, edgy drama that opens the possibility of what America can be if it rose to its higher ideals.

The title of the film comes from the practise of dervish dancing. The dance becomes a symbol for how we protest and engage with the painful realities by never giving up. The act of arresting God is to do the hard work that’s needed to restore wholeness to a world that’s so broken by war and violence.

NP: I recall in 1971 traveling through India, walking along a road, meeting and chatting with a woman who was born at the turn of the 20th century. She told me among other things that as a much younger woman she had met Mahatma Gandhi and then began to tell me a story about him. All human life I suspect consists of stories that we are part of, even tangentially. As a documentary film producer and director you have revealed the art of storytelling in very striking detail. How do you personally get from an idea and subject to the final product of a film? How do you get people to reveal themselves? How complicated is it to make a documentary?

Kaur: The documentaries I’ve worked on have all been political dealing with human rights abuses in one form or another, so I can only speak about making such films. In my personal experience, documentary filmmaking as an art form is perhaps the hardest because it requires vigilance in a way that fiction cinema does not. You have to show up truthfully to receive someone else’s story. Question your own motives for why you’re telling this particular story. Be very clear about your particular lens on the issue.

You have to educate yourself on all aspects of the particular issue to present something that is credible. You have to fact check everything. Because if you get one fact wrong, your entire film can get discredited. You have to build trust with the people you are interviewing and take responsibility for their story. That responsibility means — you will edit the material ethically, but even beyond that in the work I’ve done with stories about police brutality and state-sponsored violence, you have to connect people with resources, whether it’s human right lawyers, organizations, advocates, or medical professionals if they don’t already have access to them. Making such films is an all consuming process and I can tell you it really ages you quickly, but it’s also deeply rewarding.

NP: With the current pandemic and a myriad of international issues affecting all of us no matter where we are located, what do you think the future will look like in terms of film making? The influence of the Internet? The influences of the corporate and government world? What might future censorship issues look like?

Kaur: I want to have all the answers, but I really don’t know. I’m not sure what the future will look like for filmmaking if coronavirus continues its course. But there’s one thing that is clear: it’s that this virus has changed how we will live, work and interact moving forward. The Internet has become so essential to our lives.

I think about all the rural communities and low income people who don’t have access to this resource and fear how this will further widen the inequalities. And I worry about all the worst case scenarios of what this country will become if we don’t regulate corporate greed, protect our data, and create pathways for transparency. When few people control all the modes of communication and media, then it’s not even about censorship as much as whose voices get to be heard and whose voices are left out which is as effective as censorship.

Despite all of my worst fears about the future, I do take solace in this: Film is such a powerful medium. History has shown that when dictators take power, writers/filmmakers are among the first people to be rounded up, jailed or killed, their works burned. This has happened over and over again throughout history. But somehow artists have always found a way to tell stories subversively. So no matter what the future brings and how bleak it might be, I am optimistic that there’s no power that can crush the human spirit and take away humanity’s voice. Stories will always find a way, because they are so essential to our survival.

NP: What is on the horizon for you in terms of film and personal endeavor?

Kaur: Because everything is shut down at this moment due to the virus, I’m using this time to write, spend time with my parents, and learn new recipes.