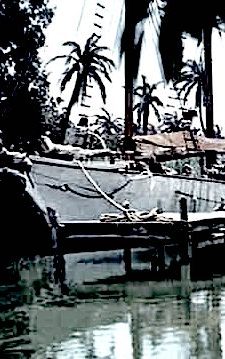 There are sailors who seek the open seas and vast oceans to quench their unceasing thirst for seafaring exploits and the refrains of solitude that dance in their souls amid the troubles of the world and with the promise of reimbursement for their efforts upon safely reaching port;

The voyager’s intent is a human notion, nature is without a mind, superstition while at sea serves no purpose as I bear witness to a mast high wave wash a man overboard into a watery grave, existence may appear on the surface to be moored to fate or a schedule, but the revelations from experience is that chance surpasses myth or religion and associated rituals to comfort those who remain on deck wearing the scarred mask of belief when crossing the fathomless deep;

My marine life was satiated being on a ship plunging through waves in the South Pacific, with a brief interlude crossing the Bay of Bengal and the Arabian Sea, and wishing I had made a course correction in my voyage and set the compass for things wanting my attention and the charm of a different, colorful harbor and bay, to pour myself into writing unglamorous prose while taking in the fragrance of wharf delicacies;

And so over the years my lascivious wants allowed brief excursions – to sit on a Chinese junk, schooner, motorsailer and tugboat….from Charleston Harbor to the South China Sea and the waters of Hong Kong and Macao and places exotic and removed from the in-landers and their intensely fashioned lives, for I also have found it’s less disquieting to be impoverished next to the water, rather than being poor further inland, as the face of wisdom hints of a lesson in geography;

Henry David Thoreau penned in his Journal on the 13th of November, 1839 ~ Make the most of your regrets….to regret deeply is to live afresh, so my boat sittings all have had a singular common theme – to write if for no other reason than to be naked to myself and adapt to life’s detours with as much spirit as I could muster;

Meanwhile, boat sitting from a pragmatic posture was/is to care for the boat in which I was sitting, hence, I have offered my services for a mere pittance – to sit on boats to apprise myself and the owner of the status on a scheduled basis, and whether, in sunny weather or storm, I devise a checklist for riggings, mooring ropes, canvases, hatches, passageways, batteries, bilge pumps, engines, generators and have had to vacuum out standing water but once after a storm…the characteristics and age of the boat among other things determines such lists…still, most of my days were expended on writing, eating, some semblance of yoga or the thought of and convivial conversations with others from across the bow, who were at the beginning, middle or ending of some voyage, their journey perhaps still in progress;

I’ve learned that once the ink flows on paper endless revelations occur while sipping wine or a rum based concoction or local brew, tasting grilled fish and vegetables and succulent fresh fruits, and otherwise smelling the fragrances and pungent odors emanating from the shore along with inhaling the scent of algae floating on the water’s surface, and to compliment such interludes, becoming single sided conversant in the language of seagulls, pelicans and other sea fowl, and once catching my breath as I gazed at a lone albatross flying overhead and all the while basking my thoughts in the exotic meditations of just being.