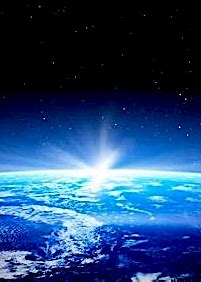 Before and after this experience of living on a planet was/is simply the transference of energy and consciousness woven into states of Being, and within the temporal length of that Being-ness is the nature of our concept of time, swallowed in the endless cycles of a perpetual expansion, a mathematical definition beyond current digital and telescopic measurements, does reality and surreality arrive at a state of the indistinguishable, somewhere along the continuum of our mind’s eye;

The invisible Creator is exposed without genitals, a naked cosmological exhibitionist who doesn’t read but shows off His parts in a rhythmic guessing game of a Word that has no Beginning, just endless numbers with the sensory consciousness revealed in the formation of Wo-Man and serving as a birthing canal, yet, in a tether-less seeking a Confession is disclosed – where is the Womb of God?

Survival arrives within the boundaries of adaptation, and the flow of energy continues, like a Zen Monk’s consciousness who knows he’s not in control of anything, except a minute reflection of the flesh’s peculiar existence, and the acknowledgement that the prophets died yesterday and the archaic dogmas receded into the brain’s alcoves as the people evolved into trans-humans, and the struggle to exist was gifted a scale to weigh the options, still, a childlike mind questioned, how does one read something that may not be there?