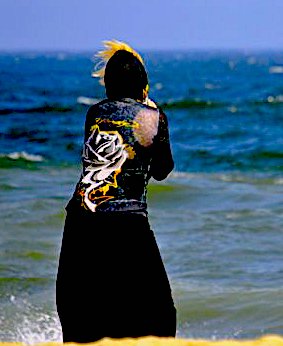 Reality for me is best entertained in chewable morsels for the sake of digestion yet in a fleeting hour it can become stale like rancid cheese that putrefies and corrupts the entire kitchen of my mind;

I prefer pure illusion while engaged in listening to Bach or Beethoven and waving my invisible wand, for you see In fact, I think the real purpose of the brain’s evolution was and is to be able to dream, fantasize, imagine and rationalize, less the lies I hear each day, eat away what remains of my soul;

A friend once told me that God spoke directly to him. Possessing existential leanings the voice of God was of interest to me so I unapologetically asked him what the voice sounded like and more precisely what God’s exact words were, even perhaps the tone of His voice?

My friend had no answer except anger for asking him such an insolent query and so replied in theological jargon, so I told him I admired his Kierkegaardian leap of faith, though privately I rationalized that believing in a being no one has ever seen is part and parcel of a fragmented evolution of the mind, pure in its own right and so one can neither completely affirm or deny but certainly question the core of such motives and intent;

So I bid him farewell and returned to my imagination and to Voltaire’s Candide, and allowed that I must cultivate my own garden, pondering the wonder of life with my remaining eyesight, hearing and the manual dexterity of my hands that claw into the chernozem or black soil and feel the deep sensuality of this moment that I am alive, knowing that the reality for me – the pure illusion and the pure truth, will soon pass into a memory diluted by time;

And, so I sit at my aging pockmarked oak table pouring a glass of red wine and listening to unfamiliar music bringing about another evolution of my mind.