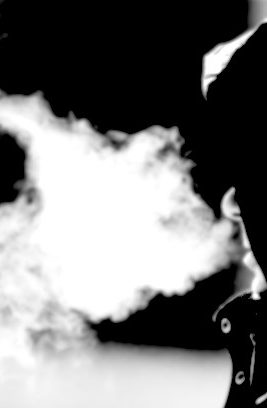 Early morning. A light rain embraced the forest. The wetness was warm to the skin, emitting a damp fragrance, filling my nostrils with the scent of fertile soil. I walked to a nearby mountain stream to listen to the rushing water splash over boulders and birds chirping from the hardwood branches above. I gazed at scattered wild flowers beginning to blossom. And I took a deep breath, knowing not all breaths are the same.

Ambivalence. I didn’t care to look too deep beyond the barks of the trees, nor the water’s surface nor that of the soil. I tried to block out a rabbit’s cry, it sounded like a human baby, cornered by a predator – a hawk picked up the prey in its talons. Creatures fought for survival in the underbrush while a drone flew overhead to see who was walking on the path below, everyone is a suspect in a world spiced with paranoia and electronic waves that pierce the flesh delivered by conspicuous technologies. And then I noticed a white-tailed deer standing in the stream look up upon hearing several cracking noises then leap over a fallen tree and disappear in the woods. Not all breaths are the same.

Adaptation. I turned up the other sounds stored in my brain, listening to jazz and classical notes to counteract the invasive buzzing overhead until the mechanical vulture disappeared and nature resumed its rhythms. I walked for over a mile, down a slope, meditations clearing my mind of images and words without meaning until I saw small ponds of blood on pavement and men dressed as the soldiering kind with military gear, banners and guns milling around a handcuffed body, voyeurs looking at their perceived empirical victory. I held to my aim while breathing in the rhymes to my soul, appreciative of the fact that not all breaths are the same.

Quiet. Muted suggests an illusion to those who have hearing unless floating in outer space or a sound proof room. I’m weary of imperforate silence. Though the inner space of my soul understands. Most creatures depend on sound to survive, with unique acoustics designed to lighten the burden of existence and entertain the pleasures of instinct. Deaf in a world of noise is disorienting. And certain pleasures are easily cross-referenced with pain in a given context, for not all breaths are the same.

Remote. I’ve experienced isolation in a Middle Eastern desert and a high elevation in East Asia, Europe and the Americas where the seclusion was merciless and the hush deafening. My ears and eyes strained to hear and see even the faintest of disturbances and to indulge the neurological structure of my auditory and visual senses. Though the vanishing rainforests of Central America were once overwhelmed in seclusion with a cacophony of intimacies immersed in the heat and humidity. Inaccessible I’ve learned can also be encountered in a church, synagogue and temple or on the grounds of the sacred architecture meant for togetherness; though not all breaths are the same.

Possession. I returned to a place I’d been staying and watched a pair of birds nestle with each other in a tree and imagined momentarily their dinosaur ancestors but prefer them in their current, comprehensible if not approachable size. I’m a pragmatic adventurer and an optimist acknowledging life has never been equal when people contest for a shrinking piece of soil, water, air, minerals and materials of wealth as if somehow they were in possession until the day arrives when they no longer can be and discover not all breaths are the same.

The gravel road of existence: I seek that which offers a place between the blasphemies of surreal oratory and the absurdist voices of reality dilettantes and somewhere other than a monk’s quiet and the existential concerto of war in staccato relationships with the machismo of empty hearts wearing sunglasses on a cloudy day. A place away from the unstable minds that celebrate their patriotic integrity wearing false badges of empathy misplaced and lost in the remnants of uncivil discourse. Hard work and working smart is of value when you have a network of relationships and know someone that can open a door to your survival. For luck is a nomad in search of an oasis. And a revolutionary era alters one’s perspective. And, wisdom, love, truth and trust appear as transitory nouns. So, speak of the joys not the sorrows for all is fleeting as justice is seldom discreet and impartial. Still, it’s easier to wear a grin on a full stomach and be suffused with optimism when you have an equitable share in your future. But, then again, not all breaths are the same.