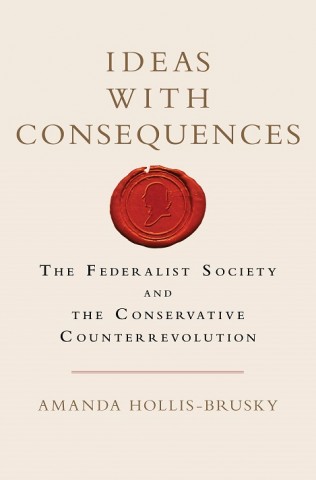 Ideas with consequences: The Federalist Society and the Conservative Counterrevolution (Studies in Postwar American Political Development) by Amanda Hollis-Brusky (2015)

Impartiality? That word comes into mind and the question surrounding it, upon perusing this scholarly work. The atmosphere whether in a judge’s chambers or in the halls of Congress or the offices of the US Supreme Court – there’s been a distinct change over the past few decades and it continues. The line between politics and policy and law is blurring. Context: There’s a harshness that’s been developing in the daily life of politics and the law and the public square. Lives are disrupted and distrust sets in while polarization rises. What are the downstream effects of judicial decisions and policy making?

Perspective depends I suppose on how close you are to the action or whether you have been paying attention to the decisions being made by district judges and politicians affecting your daily life.

Power. Who has it, why and how is it used. During the first years of the Reagan administration Yale and University of Chicago students created an organization as a response to what they perceived as the left of center liberal view of law schools and justice in the country. The agenda was to move the discourse from the training and credentialing of lawyers to the judicial system itself to the right if not far right. The society eventually grew to 40,000+ lawyers including judges and policy makers and a number of the wealthiest corporate leaders among others.

This is a thought-provoking, scholarly, exhaustive work and the author treats the subject matter in-depth and even-handedly. Her research / bibliography are quite substantial and remarkable.

The state of “justice’ in the United States is disconcerting. More right of center judges are appointed for life in district courts across the country. Judges were once vetted on their impartial views and non-political credentials. Today that has changed.

Interestingly, former Pres. Obama’s selections for district court and a “center oriented” Supreme Court justice opening was/were routinely blocked by a Republican Congress influenced by the Federalist Society, leading to the most conspicuous – Mr. Gorsuch’s appointment under a Republican president. There are four Supreme Court Justices who are members of the Federalist Society (Chief Justice Roberts, Justices Thomas, Alito and Gorsuch.

From a citizen perspective watching a district judge or Supreme Court justice making a ruling one might ask do they fully understand the downstream effect of their decision? Yes they do. Entire generations are affected: When police enter a house without a search warrant based on a suspicion or misplaced rumor, when a corporation is treated like a flesh and blood human being with an individual’s rights, when an elderly man in debt is imprisoned because he can’t pay a bill, when campaign finance is held in secret by private interests for public control, when gun control issues are so blurred nonsensical arguments develop, when abortion rights are based on politics not on a mother’s emotional and physical health are made policy, etc., etc…the list is lengthy. Are the human and humane issues obscured to divide and conquer? The judges understand. Decisions are made based on partiality. The former impartial center is now considered “left.”

Another example of partiality: A Supreme Court justice (and member of the Federalist Society), invites a lawyer (also a member of the Society) to present their case before the court. The Federalist Society in effect become “gatekeepers” of lawyers securing a position within the judicial system and what cases will be heard and supported. That’s called influence. The posture of the Society is to create an alternate elite who “controls” the reins of power.

This is an important book for understanding how the US Constitution and “Originalism” is being translated and how the district court system that affects all of our lives is a primary vehicle for the Federalist Society perspective on how we think, act and live. Freedom is a politicized word that ultimately depends on how much money you have.  The book is a useful reference tool to be consulted and reread and compared with other studies.