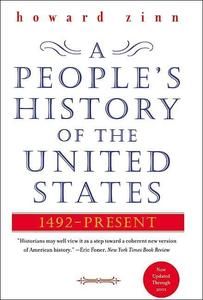 My perspective: The elitism of wealth and power is like a cancer on a democracy. It fosters a meanness that eats away at the soul of humanity. The author focuses on the history of the under-privileged, women, children, slaves, native Americans, but the implication is disturbingly deeper and affects the very notion of democracy and liberty and the treatment in empty, sterile textbooks. And that is part of the problem and the point.

Whatever occurs to a few human strands of a democracy affects the entire web of human democracy. How can any man or woman be truly free when even one human being, purposefully and or from innate wickedness, is thwarted for reasons having to do with another’s wealth and power?

This is a well-reviewed book, albeit one that has achieved and maintained its somewhat controversial status since it first appeared in print almost four decades ago and updated several years ago. The author is a reputable historian. His concern – human exploitation and manipulation – since the earliest days of the country.

The story of the United States is about the history of power and money and the lengths people will go to achieve wealth and power. We the People was/is great if you are a wealthy property owner and generally of European descent. Today it generally means an elite group of wealthy and powerful and or have connections to that wealth and power. Times change, people have memories and inevitably revolt.

Though there are no footnotes the author’s bibliography is solid. Having heard him speak, Professor Zinn was a seasoned intellectual. He shows how men of wealth play poorer men and women off each other to retain their power throughout history. Has anything changed today? Records of dissent are periodically destroyed or buried if they undermine the existing order.  History is rewritten to assuage the populace and keep people in line. Is there nothing new under the sun?

Perhaps it’s time we eliminate history textbooks altogether and concentrate on what really has taken place in the United States rather than who and what state boards affect and determine what students should read as history. In other words teachers need to offer even more diverse source material beginning at a very young age – elementary school.