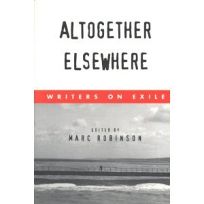 Altogether Elsewhere, Writers on Exile, edited by Marc Robison (1994)  The events of this past year and now in 2017 encourages me to look back on the history of writers living in exile and how they identified with their surroundings, things seen and unseen, politics, society, philosophy, and how they interacted with the surrounding environment.

From Joseph Brodsky’s look into the condition of exile to George Santayana’s query, “What is life but a form of motion and journey through a foreign world?” Mary McCarthy provides “A guide to Exiles, Expatriates, and Internal Emigrés” and Thomas Mann writes about his relationship to his homeland and James Baldwin’s “The New Lost Generation’ to Albert Camus’, “The Rains of New York,” to “Africa in Exile” by Es’kia Mphalele, among so many other prominent writers in history.

The value in this, at times I suppose prosaic and yet other moments intellectually stimulating work, is the provocative underlying question in some of these very personal writings: Who knows for certain, whether or not an individual as a result of a dramatic shift in political, social or other events, directly affecting their life, for which they have no control or resources, finds her or himself a refugee seeking asylum elsewhere?