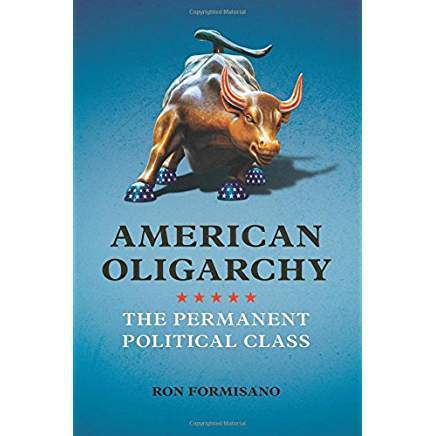 Formisano is a scholar who takes no prisoners regardless of political affiliation when it comes to America’s rising exclusive aristocracy. Wealth has the final say in the power structures of government. The public is spoon-fed what the power structure wants the people to know.

In a thoroughly researched work the author describes in detail how democracy has failed and the increasing number of impoverished will remain so as obstacles and barriers are in place to restrain them from rising above their state. The author provides insights into the problems, origins and possible outcomes in the continual rise of the aristocracy.

This work could be read on conjunction with Matthew Simonton’s, Classical Greek Oligarchy, A Political History, and his insights into how oligarchy came into existence as a reaction against democracy and how “affluence brings influence.” The author writes how in the Greek form of democracy every citizen felt obligated to participate. The elite though opposed the idea of equality. It was about money and power. The wealthiest opposition toward equality has been underway for decades as outlined in Formisano’s work.

In his American Oligarchy, the reader encounters similar issues within different contexts than the Greeks, yet the same process, whereby the ruling elite buy power and manipulate all those they consider not their equal – self-entitled by virtue of their money.

The idea of an oligarchy is to stack the judicial, economic and political system in your, the ruling class’s favor. Corruption is not new, the degree and the parasitical nature of it is formidable. This reviewer not surprised – still, the depth of the arrogance and ignorance among members of the right leaning Supreme Court remains disturbing. There are other works that offer in-depth descriptions of the court’s workings and prejudices. (See Cass R. Sunstein”s work on the Supreme Court))

The mounting student debts, the economic measures in place where such debt is inescapable and the list of ill-fated political decisions concerning environment, budget, the military and the inner workings of a now former democracy is not astonishing. The tragedy lay in the misinformation, propaganda and outright lies by those in power and the pervasive institutional corruption. The disturbing insights increase with each page as the author offers provocative detail and assessment the challenges the country faces.

In the end I sense the author’s only hope is that this will be cyclical or a “node”…meanwhile, millions will suffer and never realize a sense of integrity, dignity and self-respect a job that helps one arrive at place above mere survival, brings with it, let alone participation in an advertised “democracy.”