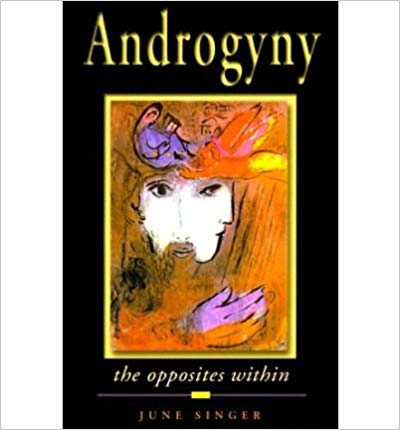 We live in the “Age of Androgyny,” not the Age of Aquarius, the author observes.

To appreciate Dr. Singer’s study, it probably is a good idea to become familiar with the concepts of psychiatrist Carl Jung’s works and the construct of archetypes. Singer’s work is scholarly and verbose and one has to sift through the study to get to the core meaning of the cultural issues she discusses. It’s worth the effort but requires patience.

The duality of the universe and the interplay of male and female energies within all humans is explored. Though heavily influenced by Jungian analysis and the male and female as opposing energies there is the recognition of the commonalty of both male and female. And when discussing myths in her voyage and journeys through Gnosticism, Taoism, Kabbalah and so forth the study though intellectually thick at times offers provocative insights.

This is a worthy study of the cultural context of the concept of androgyny.  It does not offer enough substance beyond the metaphysical for this reviewer. It’s an engaging work if one appreciates Jung’s examination of the masculine, feminine dynamic.  The journey the author undertakes might have offered deeper insight into the Age of Androgyny from other psychological and sociological viewpoints but that was not her purpose.

She notes near the end of her study – when we are children we are all androgynous and as we grow we are “polarized” into thinking in terms of male and female and what that constitutes. We become lost “in the confusion of language” that transcends what we are. Biology is emphasized at the cost of conscience. Energy flows within and between the male and female in each of us. And the energy of the whole (both male and female within each of us) affects us beyond the biological scripts we are given as a “male” and a “female.” Her work also reminds me of the influence of the mythologist, Joseph Campbell’s take on paleolithic belief, that whatever you do to one strand in the web of life you do to the entire web.

This is in part an intellectually engaging study that remains relevant today. Times are changing. The literature on androgyny is somewhat significant in terms of the various topical aspects of the concept in some of its varied shapes and forms. There’s much room for further study and exploration of this Age of Androgyny for the general reader.