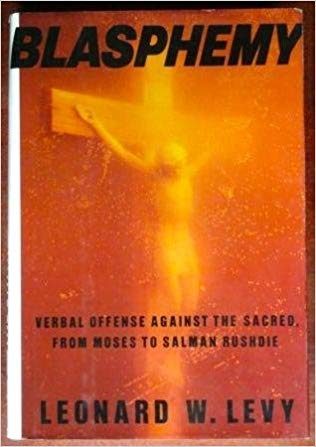 My read: A work that I have periodically taken off the shelf to consult and have found it remains relevant.  Levy writes that “Blasphemy means speaking evil of sacred matters.” The caveat being man decides what is sacred and what is not, and that applies to all religions and beliefs. Man has historically determined the nature of evil and therefore blasphemous within the context of their traditions – in other words whomever possesses the power, “inspiration ” and resources to enforce that power determines the outcome.

Levy states in the beginning of his substantial work that, “Toleration of blasphemy poses problems even for a society that can imagine gods sufficiently powerful to defend their own reputations and discriminating enough to do so by a judgement of the offender only.”

Does toleration sanction the offense allowing others to commit it? Levy notes that “even societies that cherish liberty have denied it to blasphemers. As history demonstrates even among the ancient Greeks who were quite tolerant of freedom of expression were measured in their tolerance of those ideas and expressions that violated the trust and otherwise stability of the community or tribe. Through history varied horrific forms of punishment were decreed by those in power who had a stake in maintaining a certain decorum (follow the wealth) concerning the nature of what was blasphemous.

The work is a provocative, voluminous history on the multifaceted approaches to blasphemy particularly within the Christian tradition though it scope is vast and includes Judaism and Islam.  The author aptly demonstrates that morality exists without religion and religions, as Christianity, Islam and Judaism are capable of surviving without penal sanctions.

The author ultimately leads the reader to the understanding, “that the feculent odor of persecution for the cause of conscience, which is the basic principle upon which blasphemy laws rest, has not yet dissipated,” at the time of this writing.

One significance of this work though written over twenty years ago is the reminder that the First Amendment of the United States Constitution stipulated  freedom – of religion, of the press and expression, but today in 2019 those freedoms  are under attack – especially when in disagreement with and primarily the executive branch of government. We now live in a post-truth culture. How will blasphemy, the persecutions of which have statistically dwindled, be redefined in the future? What laws will be created defining faith and nationality?

This insightful work is well-written and documented with generous notes for further research. A solid foundation/reference tool on the history of blasphemy and an important contribution to religious struggle.