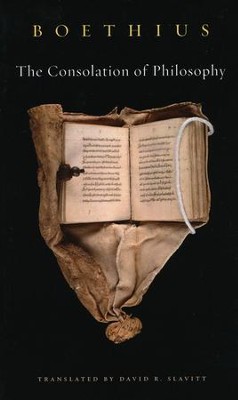 Boethius, The Consolation of Philosophy, translated by David R. Slavitt (2008)

This is one of several, and my preferred translation, of this brief but substantial work between a man, awaiting execution in the year 524, and his intimate yet dispassionate conversation with an imaginary woman, Lady Philosophy.

Boethius was a Roman patrician, senator, educated in Greek and philosophy, which placed him in good stead towards the end of his brief life. His suffering was not unique (for the untold masses of people in the lower classes), but his educated voice was able to articulate the struggle between the spheres of both the meaning of life and of death.

It is a thought-provoking work that transcends any particular religious belief though its does offer a theological taste in his references to an eternal God and I am reminded at different points made by Qoheleth (see Ecclesiastes). For example, In Book II Lady Philosophy observes that the “desire for happiness is inborn, instinctive in the minds of men. But they are led astray by false ideas of good.” What does a man gain through work, whether honest or not and accumulates wealth and power and pleasure? “These are the things all men want-wealth, high office, power, fame and pleasure…” as his imaginary lady friend observes. She speaks from a position herself of once having power (through the mind of Boethius). The impoverished suffer daily, and so perhaps think differently and only wish to have one good meal each day and a roof over their head. Regardless,  the only gain a man achieves  through work or play or the pursuit of pleasure, wealth and power is but death. None of it heals the man from within.

Lady philosopher does question whether he is any better than the weak regardless of whether he thinks so? For life ends on the same note for everyone with little hope for recovery so one is wise to seek the spiritual if they wish to be truly happy…further, ”things are known,” Lady philosophy suggests in Book VI, “not according to their natures but according to the nature of the one who is comprehending them.” Self-awareness has a Buddhist feel.

This brief, provocative work might be considered an essential read for today’s politicians and corporate and religious leaders. From a literary and philosophical perspective Slavitt’s translation is excellent.