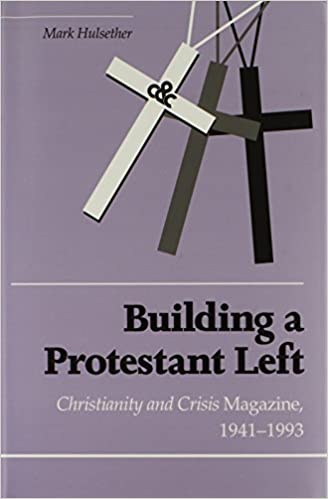 A personal perspective: I met Dr. Mark Hulsether, a Professor of Religious Studies and American Studies at the University of Tennessee in the fall of 2006. He provided me with an autographed copy of his scholarly work, which I skimmed through at first and we met to talk about it at a local restaurant. Given my library background I had a habit of checking bibliographies. I was impressed. His scholarship was superlative.The book quite honestly felt personal. It felt old. I didn’t want to go there.

Time passes. As one ages more one reflects. Decades ago occasionally may feel like yesterday & other moments in one’s life are surreal. Years into indulging myself as publisher of Narrative Paths Journal with no real budget except time I began revisiting his work between other readings, writings & consulting work.

Memories are filtered by time, experience & perception. When I became familiar with Christianity and Crisis Magazine in the mid-1960’s it was considered at the forefront of ideas within the context of progressive thought. It wasn’t read by the masses. It was an intellectual magazine. But then any number of magazines retained a richness in content during that era.

Chicago, 1965/66. I was a youth volunteer – priests, pastors and volunteers such as myself from various protestant and Catholic backgrounds would sit in an inner city church basement breaking bread and sipping wine in a shared communion of ideas and agape.

Rereading this book brought back memories. I experienced some of what Mark wrote about. I knew a few of the people  – Martin Marty at his house close to the University of Chicago’s campus and others in brief passing – in particular Harvey Cox and Michael Harrington. I heard them talk in private settings. It was an existential period filled with social, intellectual, theological and personal conflict. Like the magazine thoughtful people caught up in extraordinary, provocative years. The thirst for knowledge and action was inspiring. What could we do to change things for the better?

Which brings me to why I’m revisiting this study in 2020. Christianity “in” Crisis as I called it, or C&C was in some ways a backdrop to what was being played out in front of our eyes if we chose to see. Reinhold Niebuhr and his wife Ursula became vocal supporters of the idea concerning the ordination of pastors – there were no males or females.  Article after article explored progressive ideas from feminism, peace, the systemic nature of racism, the challenges of illiteracy,  – it was as if the Protestant churches were “on fire” with discomforting ideas that might not sit well in the myths of the middle America mind.

The 1960s and early 70s were a disquieting period, in which seeking the right questions were essential  to finding the right answer. Times change. The interesting aspect of the C&C was that it lasted as long as it did….internal dissensions arise whether about war, personalities, complex issues like Black Power, feminism, poverty, prisons, police brutality, CIA covert operations and so forth….money talks…budgets need to be balanced….the 1980s as an example, was stressful from an intellectual and social perspective ….it was the decade for Wall Street…Government was labeled as the problem…it was time for unfettered capitalism and social responsibility was not a major item on the agenda of those with power unless it was deductible on a tax return.

Hulsether’s work capture’s the zeitgeist of a magazine’s existence within the brushstrokes of the times it existed…we are living in times that Niebuhr and many others warned us about in the 1940s and facing the realism of who and what we are as a nation.

Today we have an autocratic president. The Foundations of a Protestant Left have splintered. Social constructs are experiencing a perfect storm. The demise of a republic is perceptible. Will this president cede power?  The chant of “how many people did you kill today” reverberates in the mind.

Fascism is no longer a hateful word with the far right and has been replaced with the Antifa or anti-fascist which means anyone left of center is a potential terrorist in the mind of this president.

One of the writers in C&C Jacques Ellul whose works I have reviewed on NPJ warned against the use of propaganda as truth. Noam Chomsky ahead of his time continues to express concern about human greed and the rise of socialism for the wealthy where wealth is shared between the wealthiest and capitalism for the remainder to compete for the crumbs with the characteristics of  cannibalism. Follow the money.

In summary Professor Hulsether’s study is brilliant, accessible, insightful – highly recommended for urban public and academic libraries or potentially your personal collection. It’s more than just about a magazine’s rise and fall. It about the ambiguous nature of a republic and its version of a democracy and most of all about humanity.