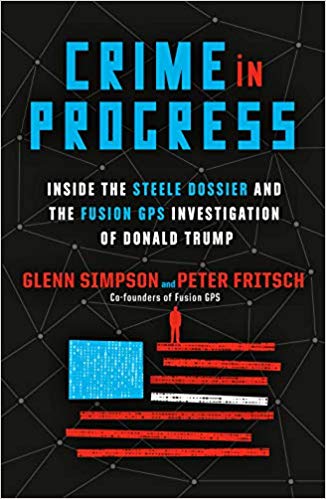 NPJ Book Review: Crime in Progress: Inside the Steele Dossier and the Fusion GPS Investigation of Donald Trump by Glenn Simpson and Peter Fritsch (2019)

My take. This substantive book reads like a diary. It’s provocative, non-partisan, unbiased and without theatrics. It offers insights in detail the Russian engagement in the 2016 election of Donald Trump as US President.

The founders of Fusion GPS formerly worked at the Wall Street Journal. They are conservative in the traditional sense of the word. Their credentials are significant as they leave very few stones unturned to the chagrin of any official who has felt the scope of their research. The ten staff professional consulting firm was contacted to do some research work. They had already completed work for a variety of clients and intelligence agencies over the years. This project created special challenges.

The authors describe how they needed to bring in an expert that was fluent in Russian and experienced in Russian intelligence/politics/culture. They brought in Christopher Steele, retired MI6 agent who fit the needed qualifications. Steele has no ax to grind (in fact he was a friend of a Trump family member); he was professional with trusted sources in Moscow whom he didn’t want to compromise for personal safety fears. He was in the beginning unaware of who hired Fusion GPS who in turn consulted with him.

The senior officials that brought the dossier to Trump’s attention would not have done so without ascribing credibility to the dossier.

The thesis of the dossier was “that the Russians had significant leverage over Trump and had worked alongside the (Trump) election team to enhance the odds in November (2016) that he’d be elected. Trump’s “team” was in close contact with Russian officials to make his election happen (and then he could turn around and say how surprised he was). The public was manipulated from the beginning. His election was orchestrated with the help of the Russian government. Putin’s team was in close contact with Trump’s team on a regular basis.

Though any number of presidents can be faulted for their mischievous behavior, Trumps behavior exceeds the misdeeds of Nixon, Clinton and others. In retrospect there’s few US leaders to compare Trump to in US history dating back to the founders of the Republic.

This work is more illuminating than any number of spy novels as it’s real life. Not post-truth. The post-truth would come when a strategy was put in to place under the direction of the US President to undermine, disinform, mislead and dissuade the public through a massive marketing campaign. The name calling, joking, bullying and orchestrating his own dictatorial tactics (tweets, rallies, etc.) were and are just the tip of the iceberg. This work also demonstrated that the complex Russian ties was a Trump family affair. The crime continues as the authors suggest.

This work retains a journalistic writing style as one would expect – a straight-forward Fusion GPS story. The information is disturbing though not surprising considering we are living through a tragedy that is cumulative on a daily basis. The authors provide voluminous notes as to their sources. This is a solid resource.