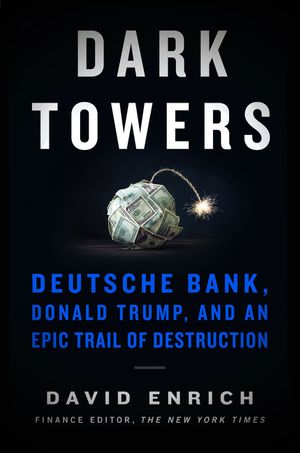 This is an atypical review. After  studying, living and working in parts of Asia and experiencing the Middle East I visited a number of the usual haunts in Europe until I settled for a very brief period in Frankfort, Germany.

It was a Saturday morning in Frankfort where I met an intriguing woman near an intersection with whom I asked if she could help me find a particular bookshop. She smiled as she was on the way to the shop herself. Some small talk led to a drink and a conversation in which she and I developed a  connection, during which was revealed that she was an officer at Deutsche Bank. Over time we stayed in touch.

What does this have to do with the twin or Dark Towers where she worked? It’s just that I’m not surprised. I’m not surprised by the findings, the corruption or the manipulations of President Trump or Jared Kushner and so many others. I admit I occasionally allow naïveté to seep into my brain but a portion of Deutsche Bank internal machinations were unsurprising.

Dark Towers is but a chapter and a facet in and of Deutsche Bank’s multinational existence and experience. When I think of Deutsche Bank I also think of the vague familiarity of my banker friend’s corollary; “Whomever controls the debt is in control and in a sense is like the helmsman of a ship – the passengers, cargo, maintenance and destination – everything to survive the voyage is under his control.”  The problem arises when things go sideways or when a forecasted political storm arises and you look the other way towards money and its obligations rather than what the storm may produce. It’s a gamble with other people’s money and lives. So what’s new under stars.

The author’s work is revealing (much has been exposed over time before publication) and still he leaves the reader with the impression that there’s more to be revealed. The internal and external history dealings of Deutsche bank from Auschwitz to small arms and ensuing battles – the downstream effects are tragic. Follow the money is an old cliché. That’s the nature of the banking industry. Not all dealings are corrupt but when greed rises above ethics and moral responsibility and the financial investors feed off the blood of their victims then a correction to balance the ship is wanted and needed. And when the lure of Wall Street and untold wealth enters the stage the entire theater of business may infect countless others in the audience like an uncontrolled virus.

Deutsche Bank is in a difficult place.  Loans to the Trump family, Russian oligarchs and so many others of who think not of the people they serve but of their own wallet or purse and family connections is just the surface of deeper ethical questions about humanity.

Overall, the author has offered a well-researched, easy to access and difficult to put down read once you begin. The work leaves more questions in my mind.