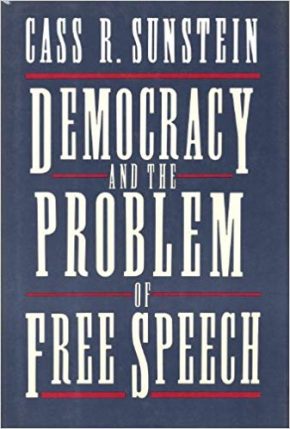 Democracy and the Problem of Free Speech by Cass R. Sunstein 1995

Sunstein’s work is a reference tool to be intellectually chewed in morsels and perhaps roused to apply James Madison’s constitutional thoughts about free speech and democracy.

The words of the First Amendment remain essentially as articulated in the draft of the US Constitution. The Federalist papers show the heated discussion of the constitution’s difficulties with brilliant minds on all sides articulating their positions – one of the chief results was the First Amendment being viewed as a bulwark of American democracy.

Sunstein covers much complex ground (this is several books under one cover) and so I find it useful as a reference. In an early section the author discusses the absolutist position that government is the enemy of free speech and the First Amendment should be understood as embodying a commitment to a strong conception of neutrality, also…government may not draw a line between speech it likes and speech that it hates.” And so forth. How does one distinguish the difference between political and nonpolitical speech is more than a gnawing question.

The three branches of government – legislative, judicial and executive allow power to be balanced. When that balance is usurped by one branch over the others one comes perilously close to a dictatorship and the Founding fathers were weary of monarchies to the point of bloodshed.

Tangentially, when government is woven into the military industrial complex and where past privacies have been obliterated through the effect of high technologies the question is what next? The marketplace of thought on one level has affected the language of free speech and the nature of democracy? How does one go about having a reasoned opinion unless one deliberates with other people we feel are reasonable? Belief is a powerful tool of persuasion.

Given the marketplace where people are bombarded beginning in childhood are we able to reason with clarity? What is effect of money and power but to create an orthodoxy? Isn’t to resist a form of heresy.

Sunstein maintains and for good reasons James Madison arguments for free speech have a place in cyberspace and modern telecommunications but the times have changed dramatically in the first six months of 2017. If one wishes to be intellectually stirred then read this as a reference tool in the midst of change.