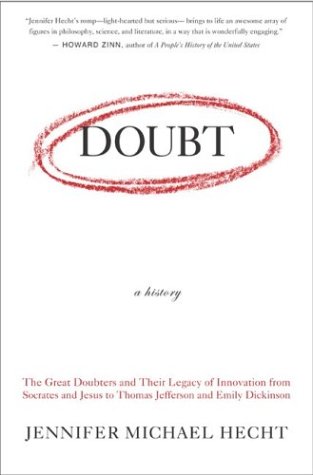 Doubt, A History by Jennifer Michael Hecht, (2004)  This is a book that one waited for and hoped would be written someday. Not that there hasn’t been a variety of books written about doubt as applied to various subjects, be it art, theology, philosophy and so forth. This one is a tour de force of doubt’s history from the ancient Greeks and Hebrews to the present.

As a historian, librarian and philosopher I have wondered about individual nomads wandering across the ancient plains and through the thick jungles (also of their minds) who were seized with doubt about what was taking place in his or her environment – the archaeologist, anthropologist and historian can only speculate. Documentation is invaluable. The Greeks among others offered a “banquet” of recorded doubt.

Hecht has provided an intellectual feast and a passion for her subject. You see, some books can be gulped like a tasty beer on a hot summer day and other books sipped like a fine red wine during cool autumn evenings. This is the latter. Hecht has written a stimulating and thought-provoking historical reference tool for understanding the role of skeptics, doubters and their legacy from the ancient Greeks and Hebrews to the Renaissance, Thomas Paine and Jefferson to the present day of science and “moral ambiguity,” among other descriptors. Her comprehensive study is accessible, easily digestible, handy reference guide for those wishing to explore the thoughts, philosophies and intellectual nuances of prominent doubters in history. This is a book I turn to when my mind needs to be refreshed, which of late tends to be on a regular basis. Hecht’s quest for her subject is fully displayed as she uncovers those moments and individuals between and during the “pinnacles of certainty.”

Doubt, A History is increasing relevant in the 21st century. There is no ‘finis’ to this study, rather only the beginnings of awareness. We live in a scientific period in which demonstrable facts are more essential than ever. In fact our survival as a civilized human species may depend on it. I can only ponder how many individuals throughout history have doubted in silence and in fear. This is one of my favorite references.