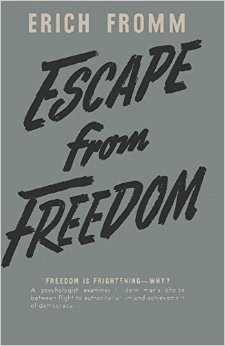 Escape from Freedom by Erich Fromm(1941)

On a shelf in my library is a 1941 hardcopy edition of Fromm’s Escape from Freedom.

My take: The author departed Germany in 1933. As an eminent social philosopher and psychoanalyst he was repulsed, to put it gently, by the rise of authoritarianism and totalitarianism.

Considered at the time to be controversial, he traces the human social condition from the Middle Ages to 20th century world wars. This work has aged well as it strikes a chord that reminds the reader of where the United States and world is at in 2019 with the rise of authoritarianism. Our quest for freedom through unadulterated competition and capitalism and the unfettered propaganda of purposeful deception has strangled the very freedoms we are conflicted about.

For me the author’s concern about being a cog is exemplified by Charlie’s Chaplin’s film depicting the human as a cog in a giant machine where the individual feels alienated and dehumanized.

Interestingly, as an aside, today with thousands of self-help books in libraries telling us to follow our passion but with certain stipulations….we remain existential…what does it mean to exist? Fear and intimidation are motivating factors used by politicians and corporate leaders of all stripes, to mold and manipulate. There are exceptions. Still, the military-industrial complex is deeply rooted in rising authoritarian personalities and the question becomes to what degree is the individual able to freely determine their own existence without the liberty that money allows.

Our very existence and humanity appears to be at stake…with the denial of climate change, the proliferation of nuclear weapons, white supremacy, populism, the mischaracterization of religious beliefs, immigration ‘concentration camps’, entrenched authority (government and corporate boardroom) and the media interested in the bottom line of the dollar appear to be fighting a yet to be understood battle. The cry for leadership is also a cry of alienation and estrangement.

Having also just finished a reading of On Anarchism by Noam Chomsky (a much mis-aligned term) the want of a transformation in our social and political structures becomes evident.

Reaching back to Fromm’s thinking, one senses a major political revolution is truly underway.   This work remains relevant as a piece of history and an insight to where we are at today and the potential direction(s) we are headed.