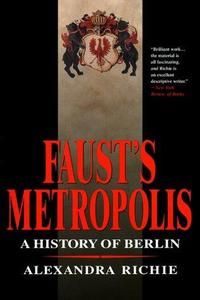 Faust’s Metropolis, A History of Berlin by Alexandra Riche (1998)

Voltaire once observed: “We owe respect to the living and to the dead only truth.”

I’ve used Richie’s immense work as reference tool over the years to compare and contrast to other studies when digging deeper on a specific subject in German history including geography of which Berlin’s location is a separate book itself, along with its architecture and economic history.

Being familiar with Marlowe, Manning and Goethe’s work on Faust and the dynamic work of Butler’s The Fortunes of Faust, the history of the City of Berlin has parallels unlike Leipzig and other haunts of the famous doctor for which the author liberally and understandably draws a parallel theme. Each chapter is introduced with a quote from Faust. The author writes, “And like Faust, Berlin has two spirits in the same breast.”

That said, this work is vast in scope. It has it generalities but along the way there are numerous, brilliant insights in its 900 plus pages. The bibliography is excellent. The study contains a wealth of research even if a given scholar might disagree with the author’s assessment on a particular event. That’s the nature of historical studies. They are perspectives. From ancient history through the Cold War and the fall of  the Berlin Wall and after, this is an engrossing and accessible study.

In covering the 1930s, one can see a parallel between today’s waves of nationalism to those in Germany. “A few months before Hitler took power Siegfried Kracauer wrote: whoever stays any length of time in a Berlin hardly knows in the end where he really came from.” And as people were deported in mass from the country without judicial review a fear set in as people became complicit in the ruling elite’s frenzy for authoritarian control.

The mass of the dictator’s supporters and officials were seeking to be greater than ever before. “A young SA recruit told the journalist Louis P. Lochner that he enjoyed beating SA prisoner because it was safe to assume that he is guilty, else he would not have been arrested and brought here…Berliners were not inherently evil, as immediate post-wat histories liked to make out… but many were naïve, cowardly, greedy or indifferent in an age when such weakness could mean the difference between life and death.”

From the tragedy surrounding WWII to the Marshall Plan for relief while Berlin was decided between East and West thew author covers the varied stages Berlin’s existential nature.

Richie’s provocative History of Berlin is remarkable as it is engaging and creates more questions and the desire to know more. This remains a worthwhile read.