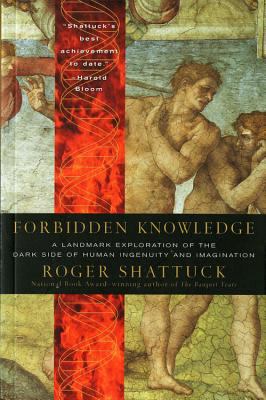 Forbidden Knowledge, From Prometheus to Pornography by Roger Shattuck (1996) My perspective: Seeking moral clarity can be an unsettling journey. This interestingly written 1990’s study is an acquired taste. Who decides what is forbidden, on whose behalf and upon what authority? This is a provocative work though at times feels intellectually disjointed and on the inside (boxed in warning) states: “Parents and teachers should be aware that Chapter VII does not make appropriate reading for children and minors.” Hint: It’s about the Marquis de Sade. Said chapter is not as explicit as you might think based on the warning. Standards have changed. And yet that’s on some level part of the underlying warning of the author in my view. Shattuck explores the subject with selective moral energy to proffer his insights and in many instances brilliant points particularly from a literary eye though a bit disingenuous, as if somehow he had the inside track on morality. Still he must be considered.

As the tragedy of the human play unfolds – the real pornography is not in promiscuous sex but the interweave it has with violence as depicted in the media and on film. Violence sells. The challenge is the effect it has on the immature or childlike mind. Humans still operate with theologies that have yet to catch up with their technologies. This has long been a point of literary and sociological contention. Let the reader be aware.

The author asks whether knowledge brings more problem than solutions – over population to weapons of mass destruction we accumulate more knowledge but with fewer answers. His comments about Frankenstein and Faust engage the concept of scientific hubris. He writes about Faustian bargain and the Frankenstein monster and “the yearning to surmount the flux of time and to eternalize the moment.” And, we invent then, live ‘in anticipation’ of our inventions.

Shattuck delves into the far side of curiosity with an interest in language and how we use words. The work is filled with varied stories and perspectives from mythology including tales surrounding Prometheus and the meaning of existence. His search is for moral clarity. Context is significant when perusing this work.

I found this study to be a reference tool in deciphering various moral issues in literature, mythology, theology, science, pornography and the occult among others. Are there some things we should know and others that we should not? Morality is a road filled with the cobblestones and potholes of deception. The author is a moralist who makes use of literary references to define his position that one can gain knowledge but still refrain from exploiting it. Censorship is a slippery slope. Words can effectuate both insightful, supportive as well as abusive actions?

A number of readers today may take issue with this work and have done so while others have noted its brilliance and the depth of its understanding. It was sitting on my shelf for a long time. I find it to best used as a reference tool with a reminder of how much has changed in the past twenty years. This is a thought-provoking study of morality.