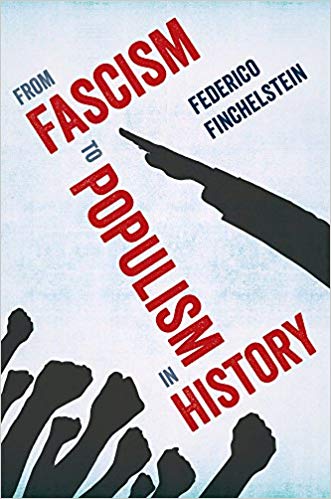 From Fascism to Populism in History by Federico Finchelstein  (2017)

Finchelstein, Professor of History at the New School for Social Research and Eugene Lang College in New York City offers brilliant and provocative ideas and insights into the nature of fascism and populism and the historical underpinnings and connections.

He notes in the introduction, “Fascism as a term has the uncanny ability to absorb any new event in a way that obscures its meaning and history.” He offers numerous examples of fascism’s nature from a historical context. The first chapter, “What is fascism in history?” He begins with the genesis of fascism in northern Italy in 1919 and Benito Mussolini and being ‘”rooted in the ideology of the anti-Enlightenment, fascism was not only a reaction against liberal politics and a rejection of democracy.” The author  revisits the roots, the entanglements and downstream effects of the workings of fascism. To say it’s complex is an understatement. His thoughts are quite accessible and stimulating, whether one agrees with him or not.

In chapter two the author delves into the question of what is populism in history? He states that, “ Populism is an authoritarian form of democracy that emerged originally as a post war reformulation of fascism.” He then offers in-depth examples . The author maintains, “fascism and totalitarianism are key parts in populism’s long history, and the ways in which populism has been and continues to be used are not limited to its origins.”

He begins the third chapter by observing, “Dictatorship is one of the foundations of modern populism, but populism is not dictatorship. In the context of the early Cold War this paradox played out in modern populism’s renunciation of dictatorial rule, which in turn created a new, authoritarian regime form of democracy.” He explores the observations and interpretations of other scholars on populism and its relation to fascism.

Though today’s populism is not fascism, from the author’s perspective, what exists today is “a revamped authoritarianism that transformed the dictatorial tradition of classical fascism into an anti-liberal and intolerant form of democracy.” America today is viewed in his words, “as arguably populism’s most stunning incarnation.” Its roots are in fascism and transformed into authoritarianism. Today’s populism is historically and genetically linked to fascism…”One might argue an heir to fascism – a post fascism for democratic times, which combines a more narrow commitment to democracy with authoritarian, anti-democratic impulses.”

This is a fascinating, accessible, thought-provoking study by a scholar who is passionate about his subject and the complexities and historical trajectories of fascism and populism. There are a large number of other works on both fascism and populism from Jon-Werner Muller to Cass Mudde, etc. Finchelsteins’s work synthesizes the scholarship and inspires this reader to look even deeper. This is a timely work. The social and political implications are enormous and troublesome especially in light of our technologies that continue to outpace human relationships on a fragile planet.