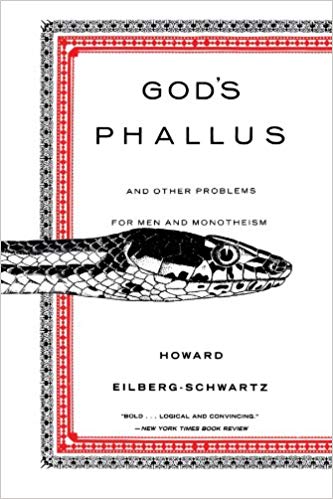 God’s Phallus and other problems for men and monotheism by Howard Eilberg-Schwartz (1994) As a young a man I periodically wondered about the role of God’s phallus (or divine penis) in human existence rather than some disembodied creature floating around and tending to the infinite universe or multiverse – an immense undertaking to say the least.

One day I came across this “absorbing and provocative” scholarly study where the author states, “this is a book about divine fatherhood about the ways in which the sexual body of a father God is troubling for the conception of masculinity… and explores how tensions rising from the idea of the sexual body of the father God are expressed in the myth and ritual of religious tradition, namely, that of ancient Judaism.” Eilberg-Schwartz’s reinterpretation of monotheism is shaped by three disciplinary traditions: feminist and gender criticism, psychoanalysis and anthropology. Though this book was written over twenty years ago, it has become a classic that asks the reader to reexamine her/his ideas and images about God and masculinity and our relationships to each other.