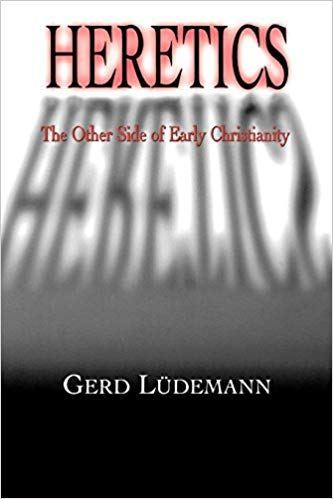 Heretics, The Other Side of Early Christianity by Gerd Ludemann. 1996 (English translation)

As I began selling off my remaining theology and historical works including studies on ancient cultures and religions I came across this one buried under a couple dozen other books. Gerd Ludemann was a former professor at Vanderbilt Divinity School and the University of Gottingen.

My take: this study might be considered provocative for the traditionalist and is also geared toward the specialist, though the lay reader/student may find some interesting thoughts. I purchased it at the time as I relish theological heresy when based on scholarship and evidence.

This is a fascinating depiction of primitive Christianity before the dogmas of the church were introduced. Ludemann claims the early church and its descendants have misunderstood the nature of Jesus and  as a result “excommunicated those who knew him best.”  The author examines the idea of salvation history and the thought that the separation of time between the present (1990s) and the actual life of Jesus is too great to appreciate any true understanding of the man. The church and its theologies perform a vast amount of wishful thinking through its Gospels or good news. The New Testament is inspired dogma.

The Bible as Thomas Paine would say is hearsay unless one was an actual witness to the events. Ludemann clearly points out through scholarship the Bible was written by men and inspired by the idea of God. From the perspective of  2018 this is old news though inerrancy is still preached to a ludicrous and un-scholarly extent.

What is considered thought provoking is obviously different for each reader. The schisms, conflicts, acts of terror by the religious minded, abusive actions and arguments in the streets, conferences, private meetings among officials of the church, the meeting of Councils, (think of the politicized Council of Nicaea to determine the nature of Jesus and the concept of the Trinity while bishops were entertained by prostitutes to ease their decision at the request of the Emperor) is historical. Much blood was shed and families torn apart because of theological/religious disagreements. The intense fellowship in the streets was the “social/theological media” of the day.

This work is relevant for those who appreciate a variation in understanding of the early church. There are countless scholarly historical works on the primitive church but this remains significant.  Ludemann from my perspective asks indirectly to look within to discover the roots of love of which the concept “God” finds a home and in which a man called Jesus allegedly attempted to live a life of, in part.