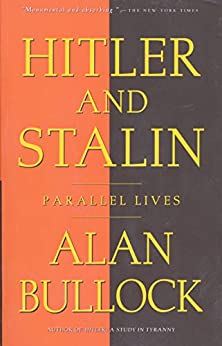 My thoughts:  I purchased the American edition in 1991. I kept it on my library reading table for years reading bits and pieces and using it as a reference for other works. It’s historically complex, the scholarship is superlative, and the writing is accessible and engaging though lengthy in some areas – it’s voluminous and detailed to say the least.

There are other in-depth individual biographies of these historic figures but this work shows the interweave between the two men without gloss, how they rose to power and for me those personal characteristics that led them to the positions they dearly sought and  the material wealth and the narcissistic affirmation that the power provided.

Bullock sees in both men their almost messianic and unshaken belief in themselves….a self-assessment as leaders – being above the law,  superior to any humane limits, compassionless, feeling no quilt for their actions and certainly no remorse for their deeds that led to the death of millions of people….yet there was a seemingly unfathomable number of followers willing to die and yet others who doubted but fell in line out of fear and the wish to survive, that in turn it’s revealed was an illusion. A key to an appreciation of both men was their lack of self-honesty…their charismatic speeches were filtered with lies and deception. They charged the people who opposed them with the very  sins and crimes they as leaders were guilty of. Core to their propaganda was nationalism – Bullock observes: “The common ground of all right-wing groups is nationalism…” (Pg. 67)

History is rewritten to satiate the appetite of those in power. Each man saw an interplay between the present, past and future. If one can rewrite the present to accommodate the future, the past then can be revised to satisfy why they were destined for their historic mission. Truth based on evidence was waylaid. Propaganda was used to deceive and accumulate more power and wealth. Whomever one has to wage war on whether the rural poor or middle class or channeling wealth to the wealthiest through whatever initiatives available, be it a so called industrial plan or the subversive use of technology – the propaganda machine under both leaders existed to convince the people they were more free than ever before while uncountable numbers perished under that same propaganda machine.

Though their actions were different and Stalin outlived Hitler their psychological profiles were similar.

The author notes: “Hitler and Nazism-by their own test, that of war (e.g., divide and conquer) were defeated and discredited” And with regard to Stalinism, scribbled on the Berlin Wall before it was demolished were the words, “Stalin is dead: Europe lives.”

Today: Questions abound in our “alternative truth” environment amid the rise of nationalistic fervor around the world, coupled with the pandemic, climate change, increasing poverty, wealth in the hands of the few, endless wars with the possibility of a nuclear accident or incident that gets out of control…what are people really seeking or must they be  indoctrinated as to what they seek?  Who will fight for democracy in name and practice? Is there room in the marketplace for human compassion? Will history in some form repeat itself and at what cost?