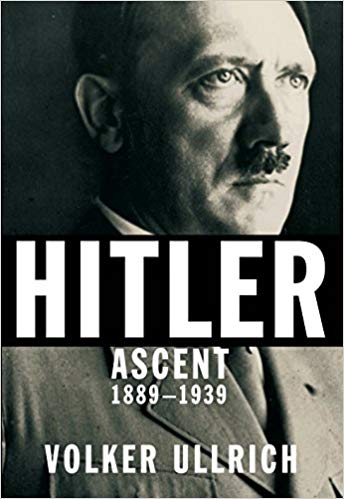 My read: from an historical perspective I have found I can only read so much of how diabolical the human mind can evolve. This substantial book is an effort to show the human side of Hitler and still is filled with disturbing revelations…it’s in the details of his life….in other words what humans are capable of.

Being quite familiar with the two volumes of Ian Kershaw’s works on Hitler I thought I knew a large number of the details of Hitler’s life if I wished to pursue them further. Kershaw does offer extensive  material and provides a balance to Ullrich’s work.

What I discovered in Ullrich’s expansive work was a fleshing out of the man and his thought process with materials previously thought to be inaccessible. Hitler’s need for power, the growth of anti-Semitism and his brilliance at propaganda in variety of  situations stands out to me. I don’t see it as salvaging Hitler the man as much as revealing other aspects that the author uncovered in his research.

As a lover of footnotes and bibliographies the author doesn’t  disappoint. I was tantalized by the details. Hitler had exceptional oratory skills, he was an actor (what brilliant politician isn’t) but Hitler had the talent for selecting the appropriate tone, words and voice of the common man and literally spoke to the language of the “dumbest” person in the crowd.

His speeches were filled with vulgarities and he chose to direct his oratory in a populist fashion and with a nationalistic theme.  He was a man who  brooked no dissent. Such voices he saw as a dangerous thorn that could poison his authoritarian objectives and he would purposefully smear and condescend to any who dared to besmirch his own character or ideals or have those people denounced if not conveniently disappear.  He used derisive humor as a way of mocking those who disagreed with his thoughts and policies.  He played to the common man who knew firsthand the struggles of Germany following World War I. He was organized enough to regroup after any perceived failure. As noted, the author offers thought provoking insights on how Hitler used lies as truths and was indeed a master of guile.

The context of the times explains a portion of the man and his insecurities which struck the inner chord of the German peoples. He knew his base of support and how to overcome the naïveté of those who thought the traditional, stable mindedness that created the German constitution would prevail. However, the results of Hitler’s propaganda machine and his behavior would become all too obvious in time. A number of the darker elements of his life are not discussed in depth as the author sought to uncover and explain the complexities of this human being who was extraordinary cruel, sadistic and intolerant, and yet engaging.  This work is both revealing and unsettling.

This is a hefty reference work about the man – from his early childhood to the lead up to WWII.   Hitler had his strengths, weaknesses fraught with disquieting characteristics and yet combined with an ability to seduce the masses except for those who were wary of his pursuits and out of fear they remained for the most part quiet as they didn’t have the resources for mass dissent. This book also serves as a warning about appearances and reality.