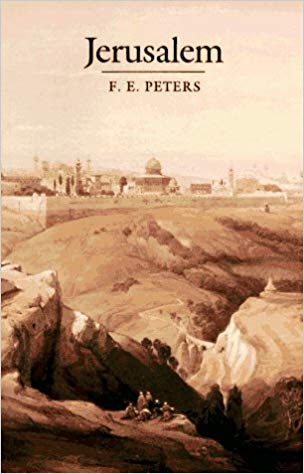 Jerusalem The Holy City in the Eyes of Chroniclers, Visitors, Pilgrims, and Prophets from the Days of Abraham to the Beginnings of Modern Times by F. E. Peters   (1985)

I read this monumental work in the early 90s and having stayed in the Old City of Jerusalem for a spell (longer in my mind then the actual number of weeks). I’m reminded of it by recent events designating the city as the Capital of Israel through political manipulation rather than knowledge of history, diplomacy or theological underpinnings and cultural diversity.

The story of Jerusalem is one of theology, sociology, psychology, culture, poetry, poverty, wealth and a multitude of intrigues both enlightening and unsettling. Power, money, God and blood are ingredients in its history.

Jerusalem came before Israel. So begins this epic work of an ancient city with foundations and influences from the Jews, Greeks, Muslims, Christians among other cultures over the centuries. What is sacred to one faith is not sacred to another.

Peters’ insightful and provocative work offers the reader first hand accounts over the centuries of those people visiting the holy city. Man (who claims he is inspired ultimately decides what is sacred and holy whether a piece of writing or a place or a person) is the force behind the city and all the beliefs he brings with him.

Did “God” render Jerusalem “holy” through His perceived acts filtered through the minds of men and women? … Is Jerusalem, “now a kind of freehold to be measured, sounded, dug, rebuilt, restored, and recolonized under appeals to science, theology, or tradition that barely masked the political, military, and financial force majeure that lay beneath.”

Jerusalem is the “Holy City” to different faiths and is “Capital” to those faiths.

This work is told objectively and judiciously. It is a reference tool for understanding Jerusalem’s history and foretells the issues for those who claim they are the rightful heirs. The Torah, the Bible and the Koran were written by men and made sacred by men regardless of how inspired they were by their God. Belief is a subjective experience as is the Holy City of Jerusalem. I felt the subjective experience laying on a cot and writing in my diary many nights and wondering what century I was in.