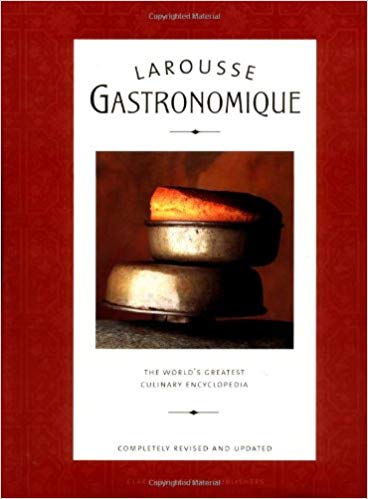 A cultural and political perspective – my modest experience suggests that when you’re sitting at a table with international guests the language of discretion and pleasure would seem obvious like the food you are being served and the cooking required to create a sensory and conversational awareness. The Gastronomique serves the appetite with digestible aplomb without being linguistically gluttonous or hoggish. (I own the 2000 English Edition and perused the 2009 Edition at a public library.)

The culinary accent of this thick, monumental work of love on food and cookery is, as the title suggests, French, and I would add, in a world-class by itself.  I’m a novice when it comes to the French language but steeped in the politics and culture of French food and especially, red wine. Though the word gastronomy possesses an expansive cuisine perception, I have found French portions refined, diverse, delicate and tasteful.

I regularly consult the Gastronomique when  I seek a depth of understanding and explanation of food and cooking, though I’m a pescatarian and have to date,  the luxury of being able to survive on fish and vegetables. That noted, the work leaves little to chance when exploring the world of food and cooking everything imaginable. The entries “describe produce, ingredients, techniques and methods, traditions and, where appropriate, innovations.”

The recipes have a cultural and political quality with a long history of refinement. There are reasons people eat what they eat and today the corporate world does have influence in the politics of personal and public taste.

Interestingly, the first Medieval cookbook was written in French in the 14th Century CE and served as a standard work for reference throughout Europe.

This is the world of food, cooking and diversity at its most formidable level, with photos that whet the appetite – a superlative encyclopedia and an excellent reference tool on your cookbook shelf, or stop by your library.