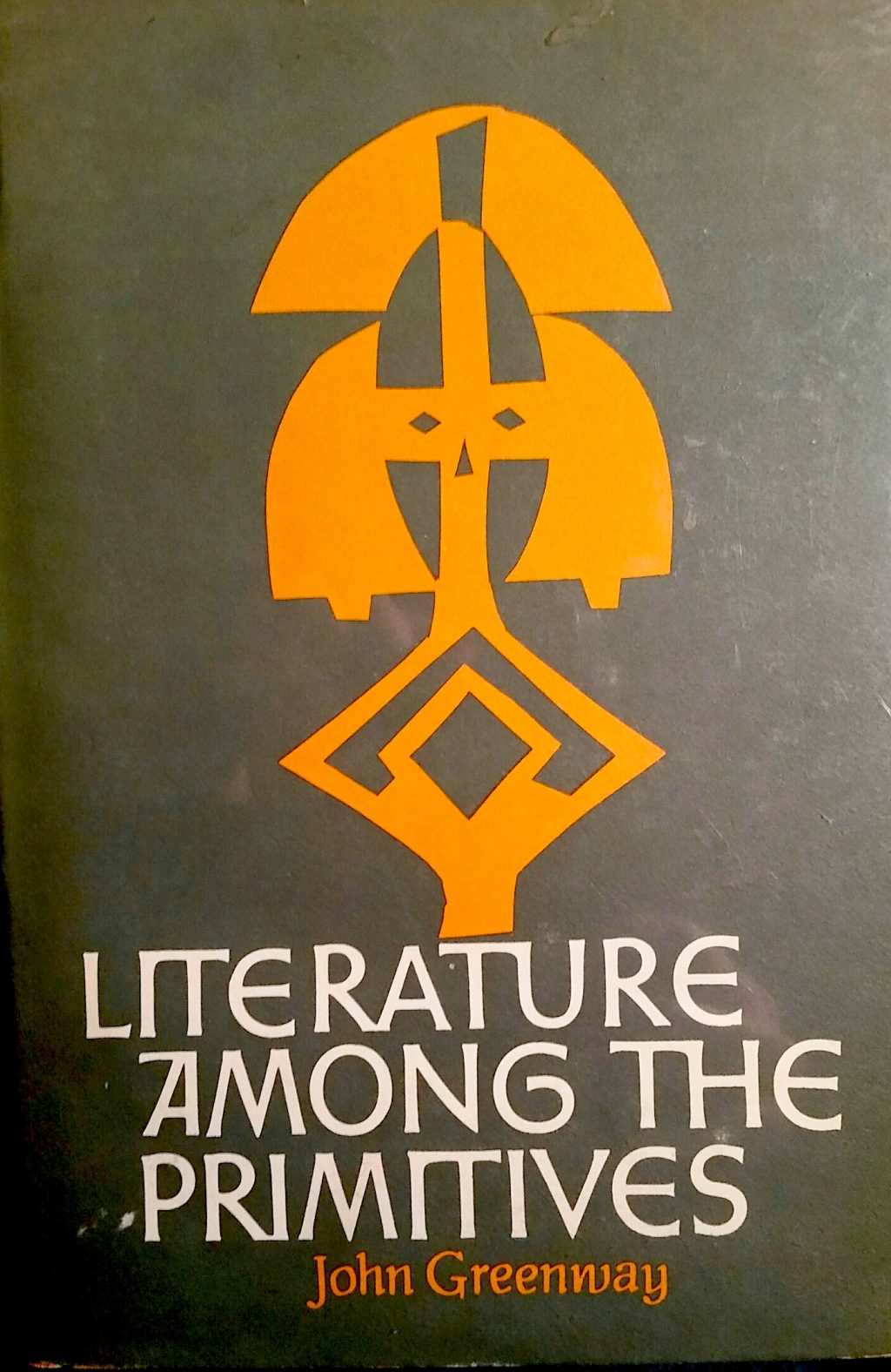 Literature Among The Primitives by John Greenway (1964)

My take: I purchased the first edition of this work a few decades ago and it’s been sitting on one of my bookshelves demanding to be read.

Primitive literature is hard to categorize. So much literature of ancient man is missing, except for a number of oral traditions, folklore, myths and stories differently interpreted and translated with each retelling. The bulk of the literature of primitive man appears to be lost.

I appreciate that anthropologists are a bit skittish tackling the subject, given the lack of source material except through fragments of poems and tales of the ancient past which was not ancient to the people experiencing them. The most ancient of stories were put into a literary form such as prehistoric paintings on the walls of a cave.

“…thousands of years before man burned clay into culinary ware, the Paleolithic people of Ariège painted a ritual dance on the walls of the cave of Le Trois-Frères, a dance that was accompanied by singing.”

Cave wall paintings are an example of a literary form that preceded pottery making is indeed fascinating as it says much about the mind of the primitive. The first thing that captures the imagination of primitive peoples are the stories detailing their life’s experiences and making sense of those experiences and what might exist beyond those physical events.

The primitive human made  sense of life through storytelling, singing and spoken poems…poetic words spoken by a another person conveyed a profound sense of the human predicament. I think it’s intriguing that the first forms of literature were painting and poetry even when handed down centuries later in fragmentary form. They are an emotional and thoughtful portrait of the world in which the people were living at the time. It was a spiritual experience with the quality of the numinous when closely inspected.

Singing, dancing, poetry and painting evolved as the primary forms of literature. The issue the author explores at length is in the examining the nature of the words – primitive and literature. The problem is the literature was there, but the collector more than likely didn’t know what he or she was looking at and so masses of literature overt the centuries were discarded.

Greenway’s analysis is probing and provocative and amusing at times. The last couple decades have witnessed some changes in the field of anthropology, but this work remains valuable for examining literature and how ancient humans communicated and especially asking thought provoking questions indictaing how little we know.

One can only imagine the very colorful and provocative oral literature of tens of thousands of years ago told with song and dance around a fire or in the darkness of a cave or aloneness on the side of a mountain peering over the terrain stretching out before them.

Approached with respect for his subject matter, Greenway offers a very knowledgeable, quality read. Useful as a reference.