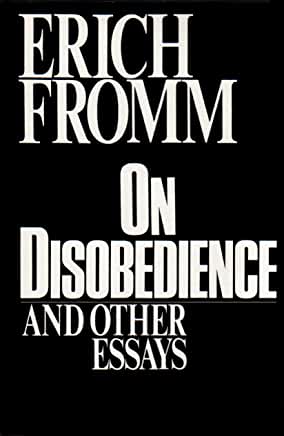 NPJ Book Review: On Disobedience and Other Essays by Erich Fromm (1981)*

The first act of disobedience entailed tasting “knowledge” through the vehicle of an apple from an allegorical tree of knowledge. The consequential act (Original Sin being disobedient to the will of God). But that singular act set man free and was the beginning of human history. Man essentially was condemned – to be free and responsible. And from the earliest of times man’s life was/is an attempt to find meaning to his short, brutal struggle to exist with a sense of self-worth. The very idea of the word God and Original Sin (both words were created by man) became a powerful tool for men to manipulate and otherwise persuade and indoctrinate.

Man created works he defined as sacred with accompanying rituals and rules and chronicled the Creator’s activities in history, that is, until man’s knowledge grew, and reason and science were interjected into human activity. Though the religious Testaments and other sacred works were viewed as a final authority by the men who created them and that authority served to justify the activities of those in power.

The point – as man’s knowledge grew his primitive based superstitions came into conflict with his knowledge and when knowledge is shared within a group or community it can also lead to greater conflict with the status quo and the powers that be. Conflict and disobedience bubbles to the surface of any culture, society, nation or tribe with the accumulation of knowledge that finds itself at odds with those in control of what people see, hear, know and understand.

To violate or transgress a rule or a sin could be punishable by death in all of its insidious designs. The idea was to seek conformity – Commandments, rituals and stories were devised based on power and concerns about how people treat each other and serve those in power. To dissent and not conform to power was and is considered an act of disobedience.

As the Fromm notes, “All martyrs of religious faiths, of freedom and of science have had to disobey those who wanted to muzzle them in order to obey their own consciences, the laws of humanity and of reason. If a man can only obey and not disobey, he is a slave; if he can only disobey and not obey, he is a rebel (not a revolutionary); he acts out of anger, disappointment, resentment, yet not in the name of a conviction or a principle.”

Modern man finds himself in a moral dilemma. What laws, rules, rituals and powers should I conform to and still be a member of a society, state, tribe or group? How much of my life is controlled by those who have power over my paycheck, my livelihood – my existence and survival should I wish to continue to survive? How do we work together for a common good while obeying our own conscience?

Fromm speaks to the concern of what do we obey and what do we disobey.  He addresses the human intuition that knows between what is right and what is wrong behavior. He suggests there is a controversial and analytic relation between obeying and disobeying and one must follow his or her conscience.

The author also suggests that “the organization man has lost the capacity to disobey, he is not even aware of the fact that he obeys. At this point in history the capacity to doubt, to criticize and to disobey may be all that stands between a future for mankind and the end of civilization.”

The challenge is when false memories and narratives are implanted how will we define humanity? How will our intuition and our human nature respond when the memory is untrue to the reality that has occurred? What will the nature of dissent be? How will the merging of technology and humans change the dynamic of disobedience and obedience?