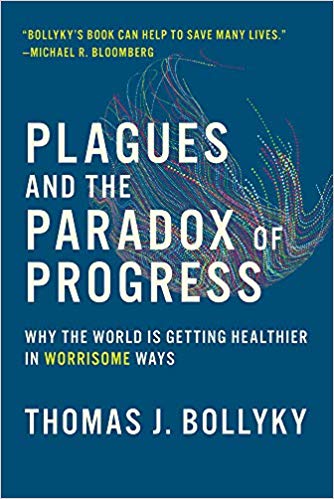 My take: In 1995 Laurie Garrett published her remarkable scholarly research on plagues/diseases in a book titled The Coming Plague: Newly Emerging Diseases in a World out of Balance. It was a disturbing book about viruses and diseases for which there were few cures as new stronger strains of viruses were and would develop for which the traditional antibiotics were of limited use. She was on target In her excellent study.

In 2018 Thomas J. Bollyky has produced an in-depth study of how medical science has resolved a large number of the medical challenges it has faced with the result that the world population in general terms is healthier. The caveat being there are still plagues, diseases and a rise in non-communicable diseases science continues to deal with. That said, the historical reality of the world in which we live is there are more people living and surviving as a result of improvements in medicine.

The population growth also means more people are having more sex without precaution for religious, cultural and illiteracy reasons. The issues are global…what happens when populations explode and where do the masses of individuals find living wage work, along with increasingly expensive shelter, food, clothing and medicine. How do they survive? Especially in an increasingly impoverished world where the divisions between rich and poor grow on a daily basis. Woven with the expanding populations is the effects of global warming, limited fresh water supplies, increased air pollution alongside the rising prospect of increasing violence and war as people compete for survival. A holistic perspective and solution are needed. The author (like Garrett in her book) describes in detail the problems with a final chapter offering possible solutions. This is not a feel-good book…neither was Garrett’s.

If we keep up to date on the news around the world and look at the scientific facts rather than solely politically generated information we realize rather quickly the world is in trouble. Fresh initiatives and collective efforts are essential. Bollyky’s informative work is not necessarily new information. Rather it’s both historical and up-to-date documented information he has pulled together in a readable and thought-provoking fashion to offer the reader a world view of what is known with some possible ways to respond to our human generated  predicament. This is a critical and significant study.