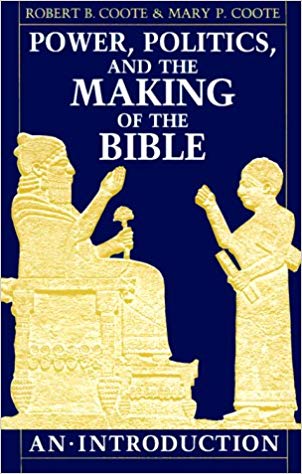 Some thoughts: This book written almost three decades ago was considered a paradigm shift towards a sociopolitical analysis of the Old and New Testaments and away from traditional historical analysis.

The implications of Robert and Mary Coote’s scholarly research remains pertinent in the study of how rulers translated their right to power through “God’s activity in history,” or producing written documents (Bible) of how and why they are in power.

That is, “The Bible was produced by demands for legitimacy following changes in rule-from David’s usurpation, through Jeroboam, Jehu and Josiah, the Persians, Aaronids, Hasmoneans, and Herodians, finally to the Romans and the Byzantine emperors and their ecclesiastical clerics…”

And it doesn’t end there. The effect of establishing such legitimacy is far-reaching.

A major theme in this study shows how the various rulers sought legitimacy and justification for their power. In different words, scribes were given the task of writing down how a given ruler obtained his power as part of “God’s will.” By ascribing the legitimacy of changes in power implying the Bible serves as a “sacred” (as defined by man) justification of all actions that occur in :His name” and  so “God” in effect, can “work in mysterious ways.”

The work is a succinct scholarly study. It examines the making of the “Bible” or “documents ” from a social and political perspective and places into cultural context the nature and effect of shifts in power and how rulers rationalize and justify their claims to power. Once man exclaims the “documents” or “Bible” he has written (through scribes) as sacred, rulers then enjoy their “legitimatized” power. The authors offer insights into the economies and the effect of wealth on politics and the social and economic implications as part of their study.

This concise, thought-provoking study provides insight into the cultural role of the making of the Bible but also inspires the questions surrounding the manipulations of power though the use of of the Bible, today.