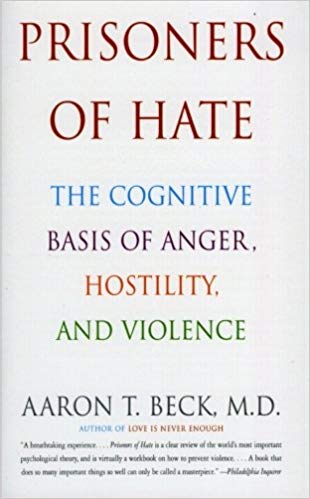 Prisoners of Hate, The Cognitive Basis of Anger, Hostility and Violence by Aaron T. Beck, M.D. (1999)

Researched and written in the late 1990’s by a leading psychiatrist this is a tightly woven look into cognitive therapy and is quite relevant today…more so with the “dazzling technological advances of our era.” These “advances (in technology) are paralleled with the savagery of the Dark Ages.”

The author looks at self-abuse, child abuse and domestic violence including rape, murder, genocide and war and then peers into their roots which in many cases are quite deep.

Questions arise in the reader’s mind: how do we individually and collectively process information? This work peers into the effects and nature of social isolation, hostility, egocentrism, mistaken judgments, misinterpretation of remarks as a result of bad experiences, unprocessed impulses, anger, violence and more – through empirical observation, studies and research using the cognitive approach.

The author’s research suggests that, “aggressive, manipulative people generally believe that their entitlements and rights override others.” He then provides detailed examples in dealing with these people.

He goes on to state that “the tendency to over interpret situations in terms of our frame of reference is an expression of an egocentric perspective.” He reviews the rational approach to the issues of violence, hostility, destructive behavior and anger. Beck outlines  the cognitive therapeutic approach to managing anger, hostility and violence. Being a rational and reasoning human being requires effort, skills and focus (one’s own feelings, hurt and anger and how those feelings are processed). The challenge of the work is applying the methods suggested by the author to the those who are viewed as offenders – the people leading a country into wars and setting up the conditions for a genocide to take place. Reasoning is not an easy task when the “other” sees itself as reasonable. The author tackles the issues through the use of negotiators using the cognitive model on a national and international level.

Beck also early on in the text, offers insight into the behavioral sequence: loss and fear leads to distress which in turn leads to a shift of focus to the offender and a feeling of anger. Permissive attitudes towards violence only accentuates the violence. He examines individual and group narcissism, egocentricity and the processes involved.

The cycle of violence, hostility and anger can be broken he argues and demonstrates the process in which the cycle can be broken.

This remains a thought-provoking work in cognitive therapy.